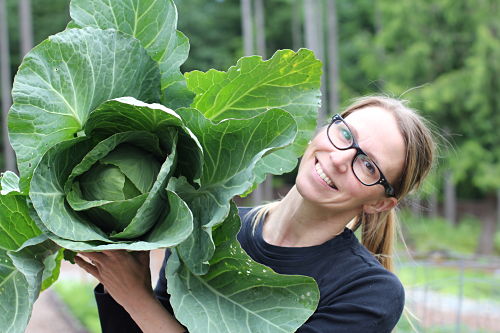 I’ve been known to grow a few tons {yes TONS!} of fresh fruits and vegetables in my very own backyard. But I’ve dedicated this year to downsizing, remodeling our house and installing a new vegetable garden. That’ll keep me busy.  I mean what else is a bored housewife living in high maintenance suburbia supposed to do? Oh I suppose I could kill time at the tanning salon or blow my money at a wine bar, but I’d rather squirrel it away for something cooler {filling your passport with stamps, anyone?}.

I’m not on this mission alone. I’m dragging my Handsome Husband, my daughter (The Girl Who Thinks She’s a Bird), my son (Monkey Boy), my adorable Puggle Dog, Lucy, along for the ride. {Seriously, Lucy is the best side kick EVER!} I also occasionally rope in my friends and neighbors (who’ve all suspected I lost my mind years ago, so they don’t even roll their eyes at me when I tell them what crazy plan I’m hatching next). Never a dull moment around here. Promise.

Lately, I’ve been a frequent guest on New Day Northwest. You can check that out HERE.

Or HERE are a few links to some recent media appearances.

Through the use of coupons, bartering, and my mad gardening skills, I’ve been able to shave a ridiculous amount of money off my family’s grocery budget over the last 5 years.

We might have drastically chopped our spending each month, but we still eat real food and so can you.  You just have to pull out a calculator and be prepared to put in a little extra time and effort.  Saving money and gardening are not rocket science. You just have to have discipline and be willing to roll up your sleeves a little bit. 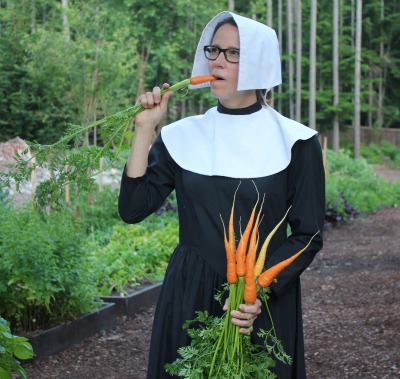 Trust me, if the pilgrims could do it, you can too!