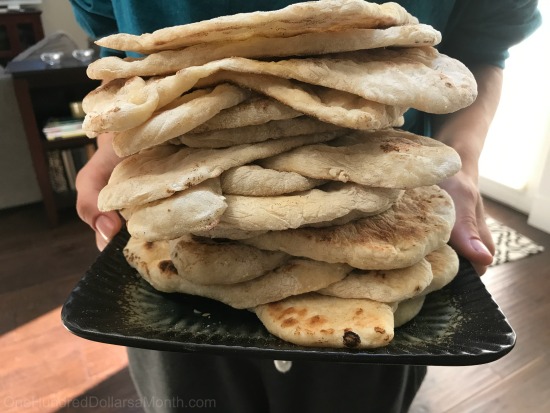 The week started off with The Girl making Naan bread. It was her first attempt and you can see she got better at rolling out the dough as she went along. She made it for a class she was taking so I didn’t even get a piece. The peeps in her classed liked it though and so I think I’ll make some sort of curry dish this week and have her make it again so we can try it. 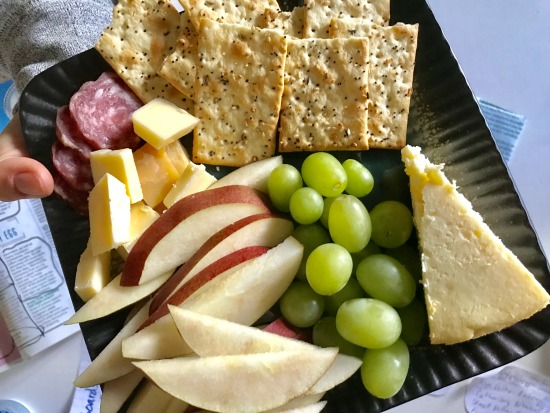 Cheese, crackers, salami, fruit and a slice of cheesecake. Now that’s my kind of dinner. I also made breaded fish and green beans, spaghetti and meatballs, kung pao chicken and a quiche last week for dinner. 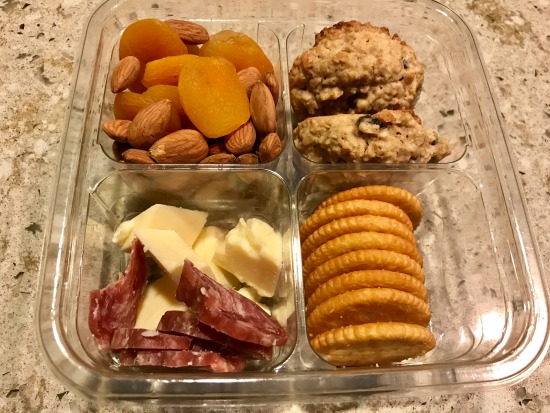 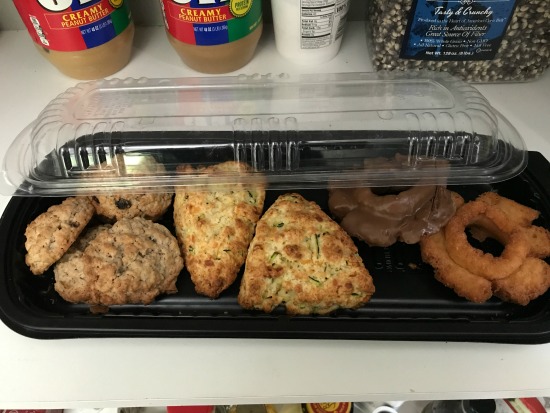 I also baked a batch of oatmeal chocolate chip cookies, a second bath of zucchini cheddar scones and froze the extra donuts from our trip to the bakery.

When I bake a batch of cookies or scones, I only set a few out at a time in the pantry {in a recycled container of course}. When those are gone, I pull a few more out of the freezer. Food seems to last longer around here that way. My mother has been doing this for years and I think that’s where I picked up the habit from. Having 2 dozen cookies sitting on the counter is never a good idea. 😉 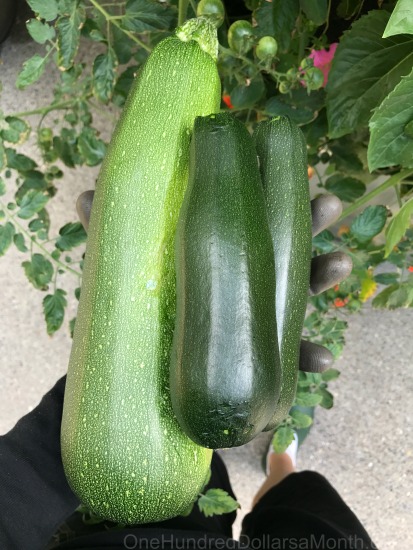 I harvested zucchini, raspberries, onions and potatoes from the garden. 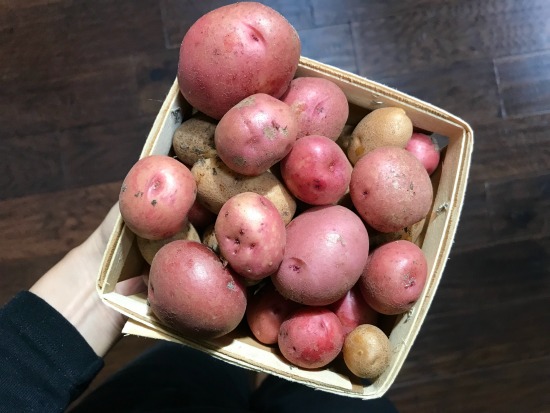 And Lucy ate the low lying raspberries and strawberries right off the plants pretty much everyday. I’m amazed she knows to wait until they turn red before eating them. 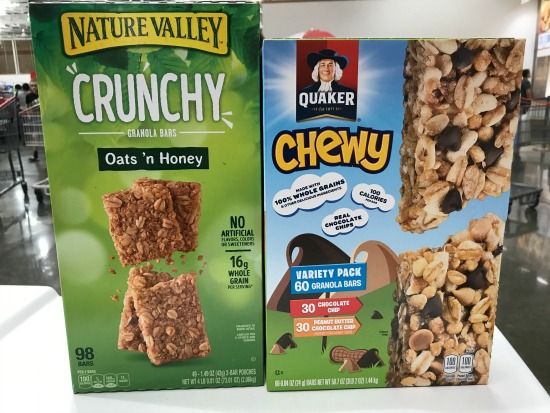 When you were a kid, do you ever remember eating granola bars? I don’t. I remember Fruit Leather {maybe because it was made locally} being a REALLY big deal {and it was expensive too}. All the cool kids had it in their lunch boxes while all the other kids had an apple or something. But granola bars? I don’t remember my mother ever buying those. And if she did {and seriously, I think I’d remember} it certainly wasn’t at the rate we, and most of America, buys them today. I mean there are grocery stores with aisles dedicated to them. It’s crazy. It’s become the go to snack of this generation. What’s up with that?

Actually, now that I think about it, I don’t even remember snacking as a kid. It just wasn’t a thing.

Hey mom, if you are reading this remember the time I was like 10 and you were curling my hair in the bathroom and I was whining about being hungry and you were like “Oh stop it, we are leaving to go to the {Brunch} buffet soon”… and then like 10 seconds later I fainted because I hadn’t eaten anything for breakfast yet?

Ya. So see, snacking, it just wasn’t a thing. Waiting until the next meal though, that was real. 😉 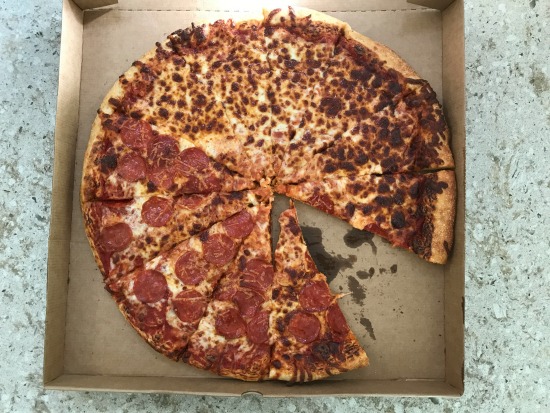 The HH was milling around the kitchen and kept asking if I wanted pizza for dinner on Saturday which was really just code for “Hey, will you drive to Costco and buy a pizza because I don’t want to.” So I did. 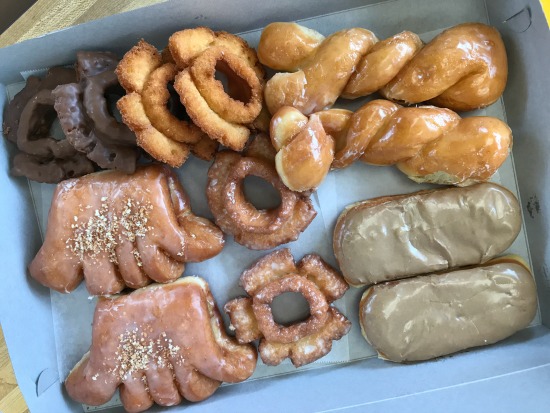 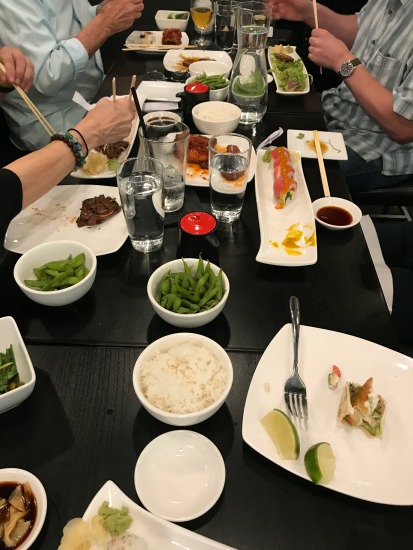 My Mom has been wanting to try the new sushi bar Japonessa and since almost everyone else loves sushi, we thought hey, why not? Usually we go to Purple {my Dad and I LOVE the food there} but hey, it can’t always be my choice, right? I mean just because I spent every summer of my childhood on a boat and have had my fill of all things seafood for um, I don’t know… a LIFETIME, doesn’t mean I can’t go and eat some rice while everyone else around me eats sushi and pops edamame across the table for two hours. Eating out is a compromise. Unless you’re Monkey Boy and all you ever want to do is go to Mc Donald’s and nobody will go with you. Then you lose. Every single time. 😉 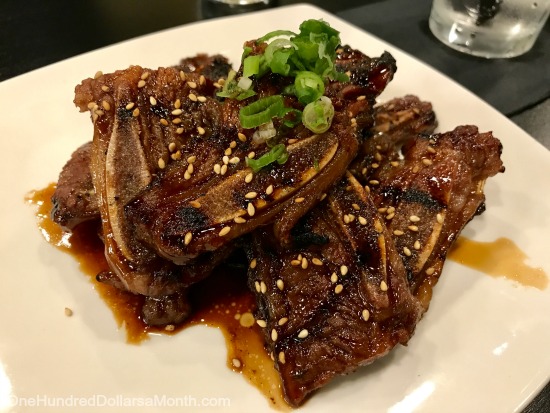 Monkey Boy isn’t a sushi eater either so he tried ribs and some sort of chicken dish. Both of which he liked. 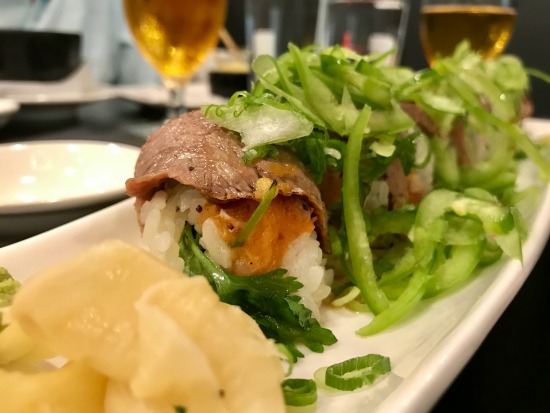 The HH had some sort of steak rolls. 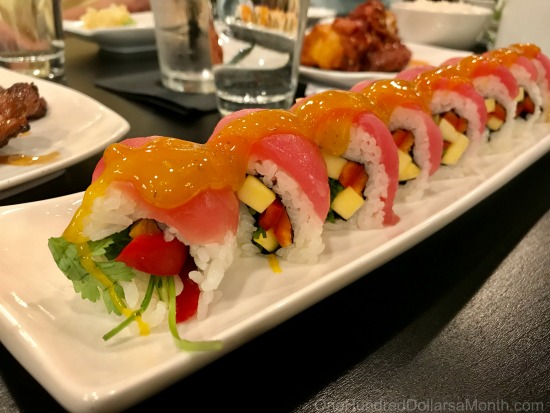 The Girl {who LOVES sushi} ordered some sort of tuna and mango rolls. Even though the bill was high, everybody enjoyed their food and had a good time. And really, that’s what going out is supposed to be, right? Having a good time. 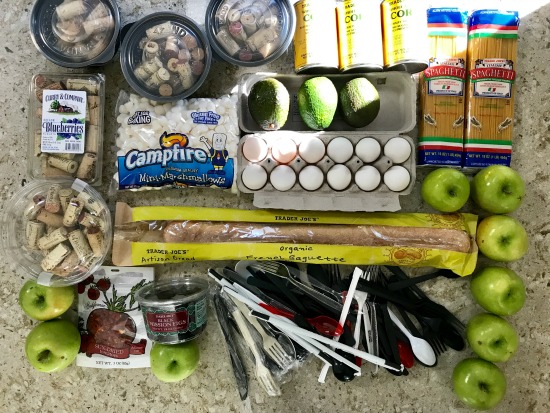 Trader Joe’s and other odds and ends – Free, thanks to mom.

After dinner we stopped by my parents place where my mother gave us a bunch of wine corks {I requested then for an art project} plastic cutlery, Granny Smith apples {apparently she has a tree now} some sun-dried tomatoes, $0.22 mini marshmallows, dried figs and all the $0.50 items from the Trader Joe’s anniversary sale {corn, bread, eggs, pasta and avocados}. I tried to give her some money but she wouldn’t take it.

It was a good week. I didn’t spend any money on groceries, just take out and restaurant food. Which seems totally out of character for me, but hey, life is like that sometimes.

How about YOU? Did you spend your food money on anything exciting this week?