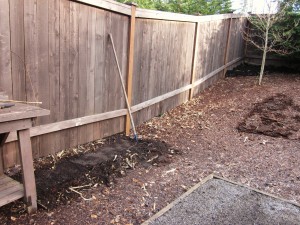 My goal for the weekend was to clear a 20′ x 20′ section of land towards the back of our property.  In anticipation of the land being cleared by late Sunday afternoon, I went ahead and had the HH pick up a truckload of garden soil on Saturday afternoon as I knew the dirt “store” was closed on Sundays.  I had planned to put the dirt in various spots within my 20′ x 20′ location.  Once it was cleared. 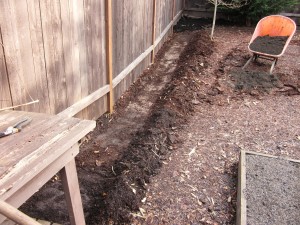 On Sunday morning, for the first time in recent memory, the HH came outside about 9 am and asked if I needed any help.  More specifically he wanted to know where I wanted the dirt.  Huh?  Don’t worry about it.  I’ll do it later I told him.  But for some reason he kept on insisting the dirt be moved {from his truck} immediately.  I tried to tell him to wait.  The dirt was not going to just one location.  There were actually several spots in the back where it needed to go. He kept insisting it be moved.  FINE.  Give me 30 minutes I told him.  So I stopped clearing the land out back and quickly started another project from my {long} list.

The future pole bean garden. I raked a 38′ x 2′ section of FROZEN bark back from the fence. 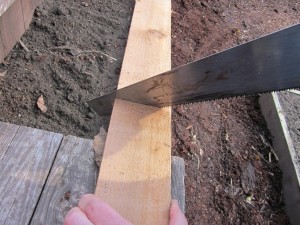 The HH hauled back about 1/2 of the dirt and then begun to help me put up a small border to separate the bark and soil using a few extra fence boards. 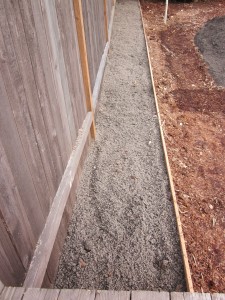 Around noon we were finally finished with the new pole bean bed.

And then he went inside and ditched me.

And then it hit me.

He wanted to get his handyman duties out-of-the-way before the Superbowl started so he wouldn’t be disturbed.