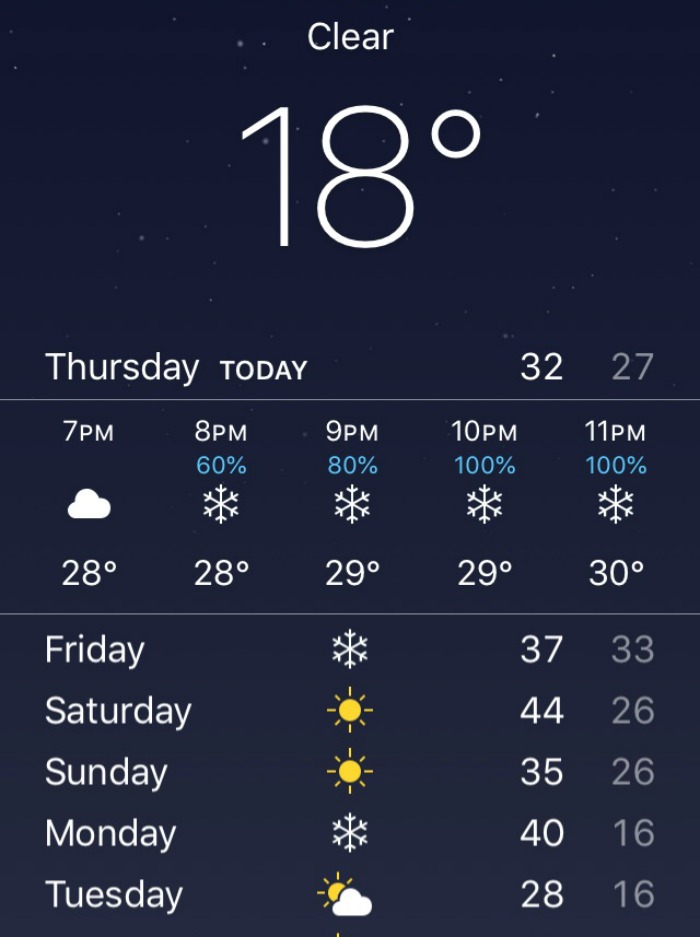 Snow is in the forecast for tonight and I couldn’t be more EXCITED! We were supposed to drive to Stockbridge, Massachusetts today to visit the Norman Rockwell Museum and about 6 other things on my list but the HH said he didn’t want to go and risk the chance of getting stuck in the snow on the drive home.

I just rolled my eyes because I knew we’d be home before the first flake was scheduled to fall. But whatever. I figure it will take a couple of big snow days for him to get over venturing out {like normal people do here} on the PLOWED HIGHWAYS. Back when we lived in Western Washington, if it snowed even an inch…. people would freak out and there would be a mad rush for groceries.

I wonder what the snowfall threshold for stocking up on supplies is here in New England. A foot of snow? Two feet? It wouldn’t matter how much snow was predicted, people would just live off beans and weenies? I don’t know, but I guess we will find out sooner or later. 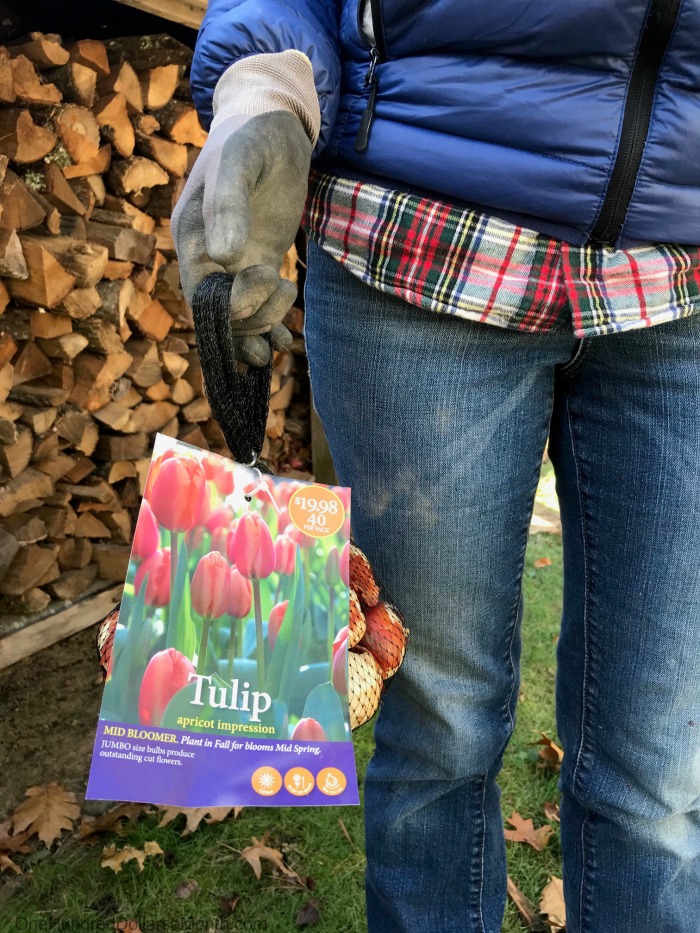 On one of his many runs to The Home Depot last week, the HH picked up a sack up tulip bulbs that were half off {wasn’t that sweet!}.  If you still haven’t planted your spring bulbs yet, I bet if there are any left in the stores, you can get a sweet deal on them right about now. 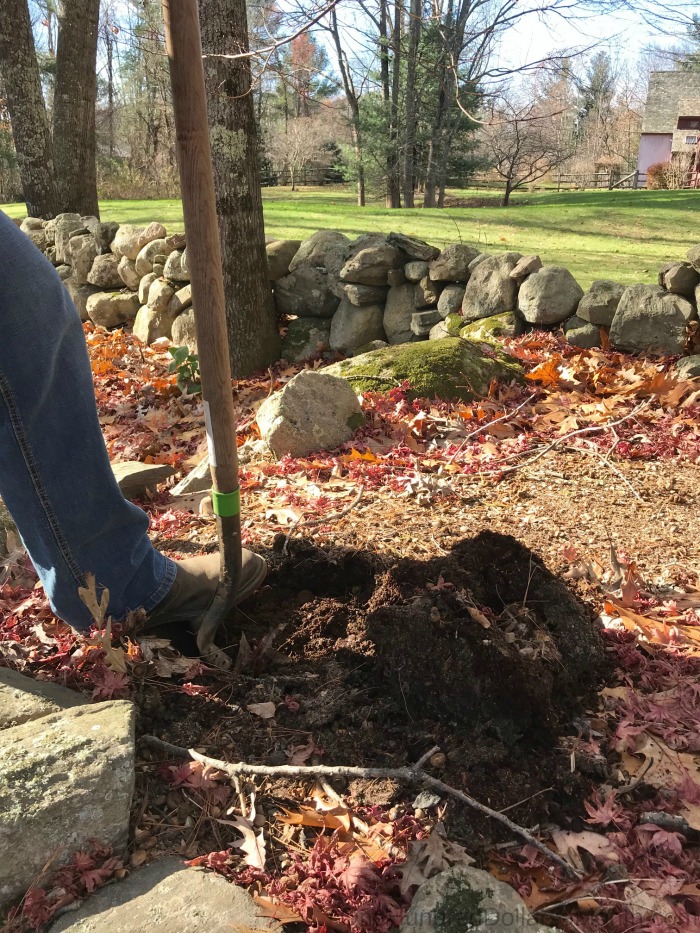 We planted a few bulbs by the mail box and the rest of them out in front of the potting shed. 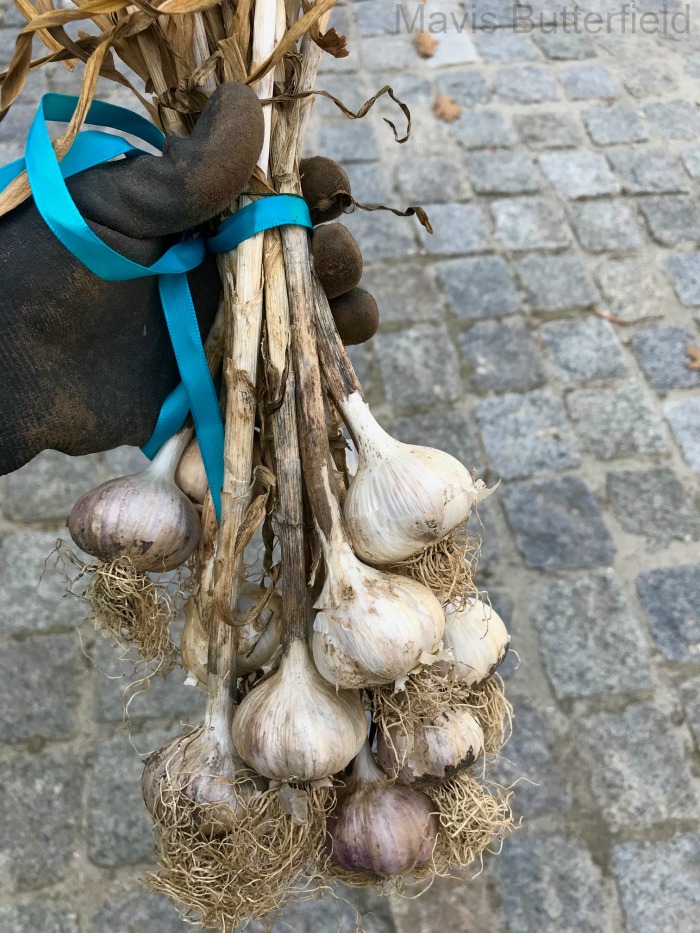 With the freezing temps on the horizon I decided it was now of never if I was going to get garlic planted in the garden. Instead of ordering bulbs online this year I purchased a nice bouquet of organic garlic at local farmer’s market back in September. The bulbs weren’t as big as the mail order ones I’ve planted in the past, but I think they’ll do. 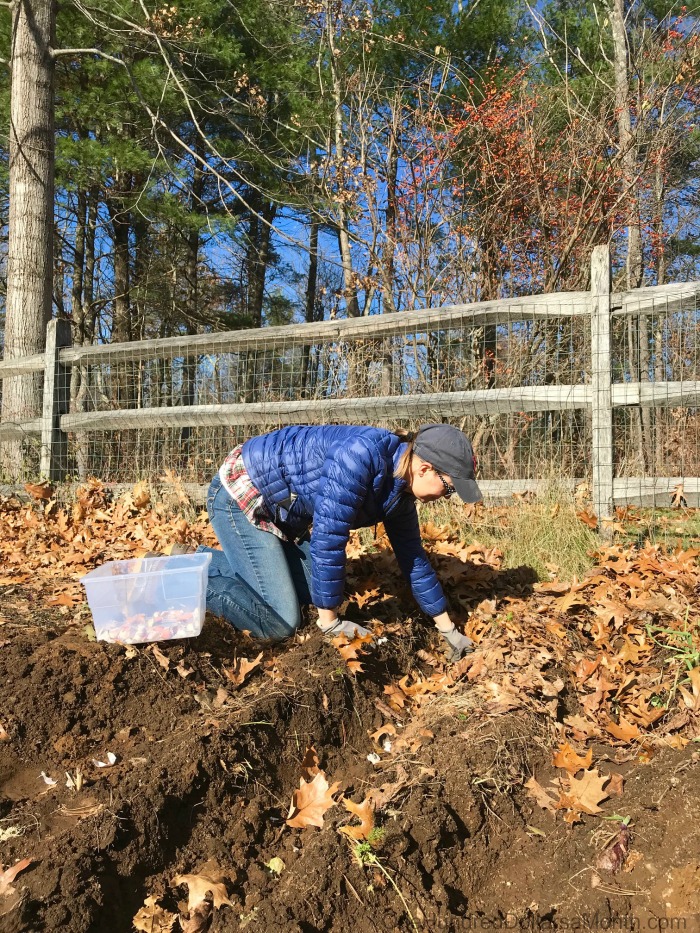 This will probably be the last picture of the garden without snow until next April. 🙂 🙂 🙂 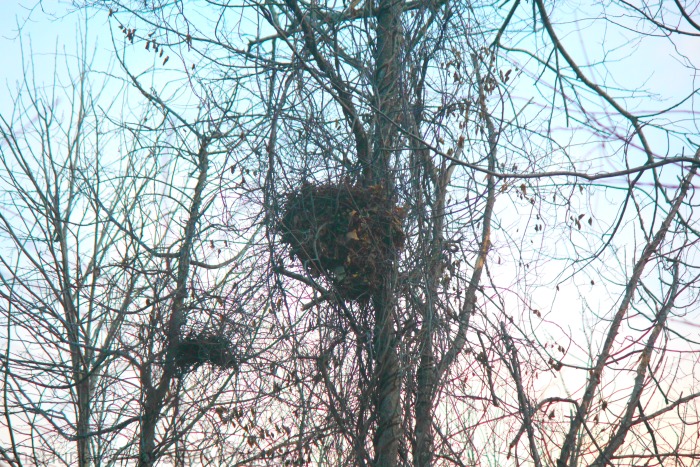 Check it out!!! A squirrels nest. Did you know squirrels build nests? I guess I never thought about it before but we have a HUGE on out back by the chicken coop.

“A 2013 German hidden-camera study of a red squirrel filmed a nest being built in work periods totaling more than three and a half hours over three days. The squirrel carried material to the site with its mouth and front paws; bent stiffer twigs with its head and face; pushed other material into place with its legs; shredded lining components by holding them with the front paws and chewing; and shaped the inner cavity by lying in it and turning around.” ~The New York Times 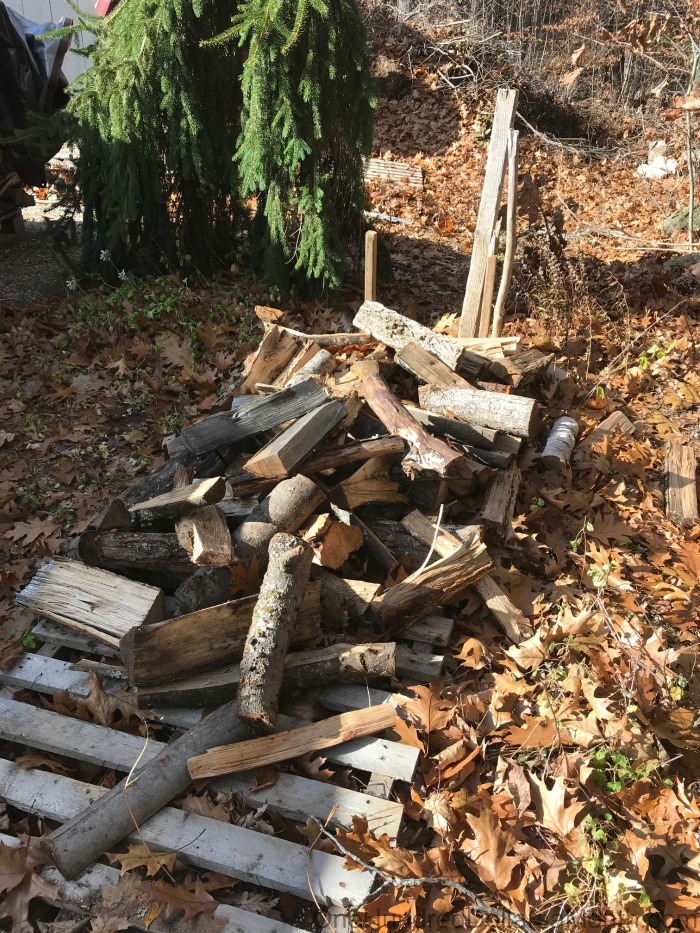 Can we talk about firewood for a minute? 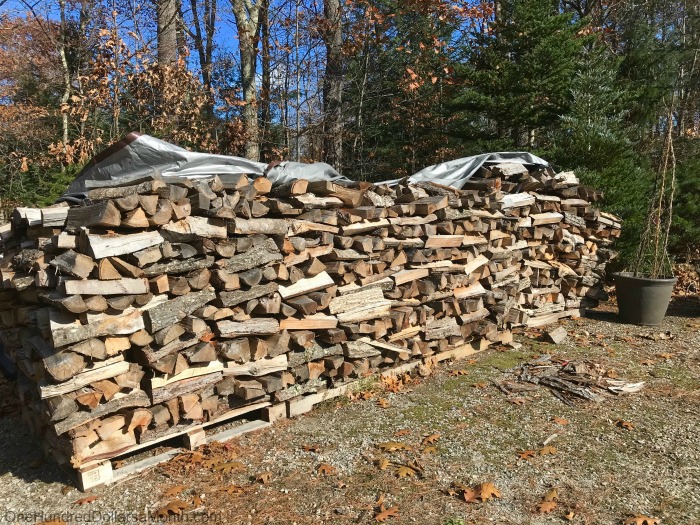 Or rather our dwindling supply of firewood? 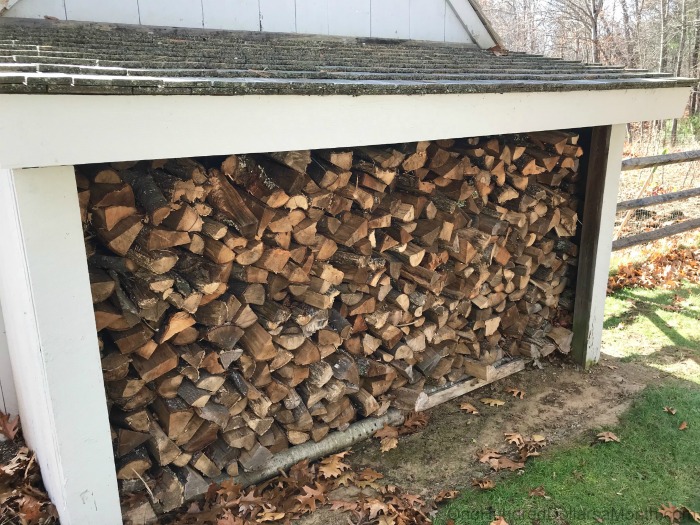 We started off the season with 4 1/2 cords of firewood. By my best estimates we have about 3, maybe 3 1/2 cords left. I wanted to order 2 more cords of wood back in September to be on the safe side…. But the HH was like, Nah, we have PLENTY. ARE YOU CRAZY? We don’t need anymore wood!

He now thinks we will be out of firewood by the end of January. 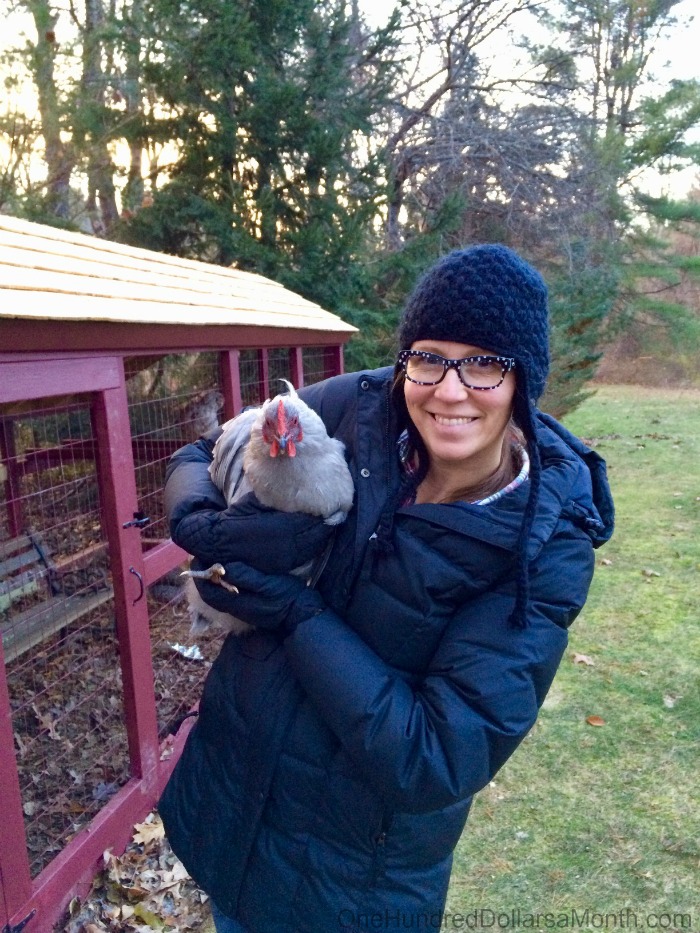 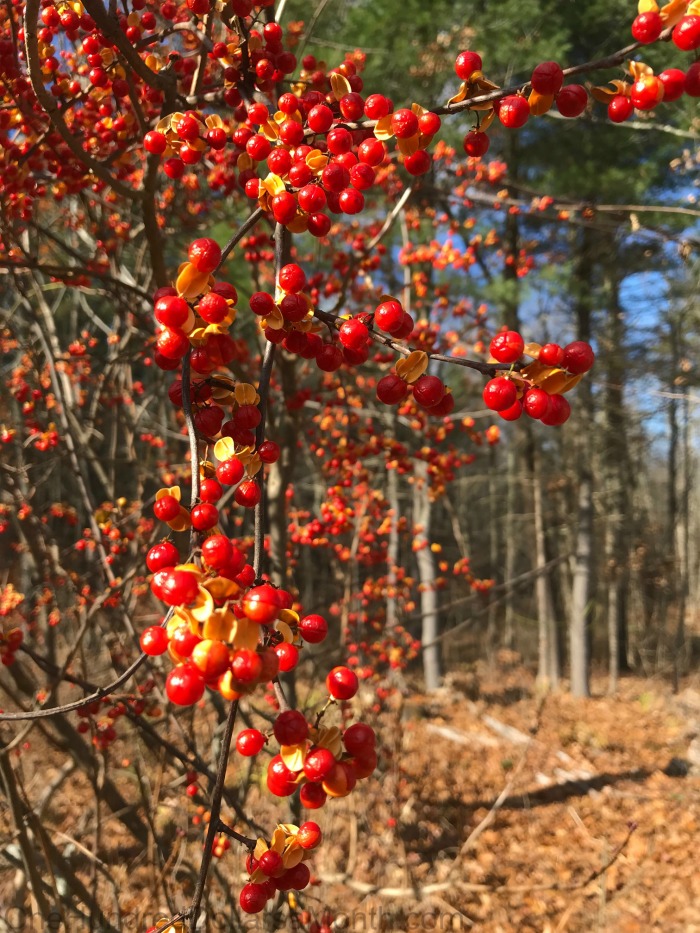 And last but not least, does anyone know what the name of this orangish-red berried plant is? I clipped a few branches to bring inside and put in one of my hanging baskets I have on the wall. Everlasting berry bush sounds familiar but I’m, not sure if that is right. Anyone know for sure?