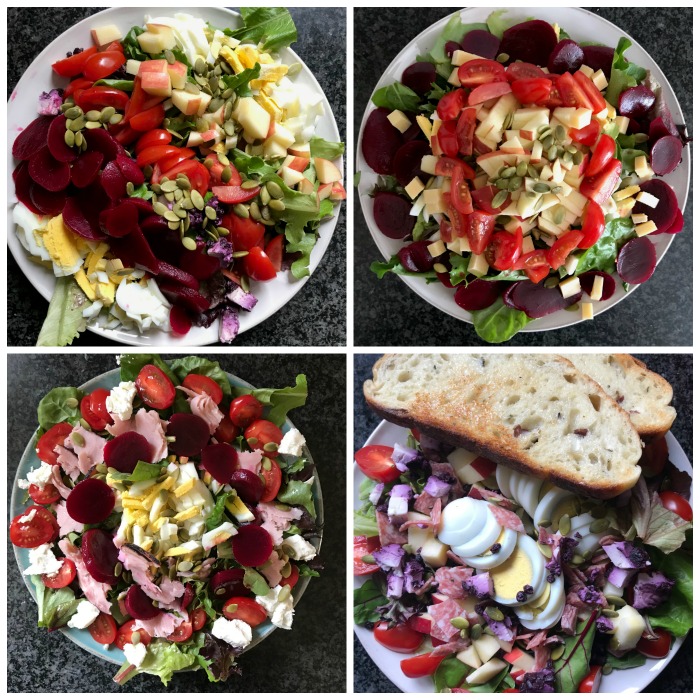 Every once in a while someone will ask me if I plan to change the name of the blog because I no longer feed my family for one hundred dollars a month. And my answer is always the same… No, I don’t plan to change the name of the blog. In fact I feel zero need to do so. For various reasons really, but mainly because these days, while I don’t focus on coupon shopping anymore, I do make an effort to spend at least $100 a month supporting the small mom and pop type shops in the town I live in.

I also spend on average of $100 a month giving back through fun little giveaways on the blog, and giving back in other ways in my community too. I just don’t feel the need to talk about it all the time. 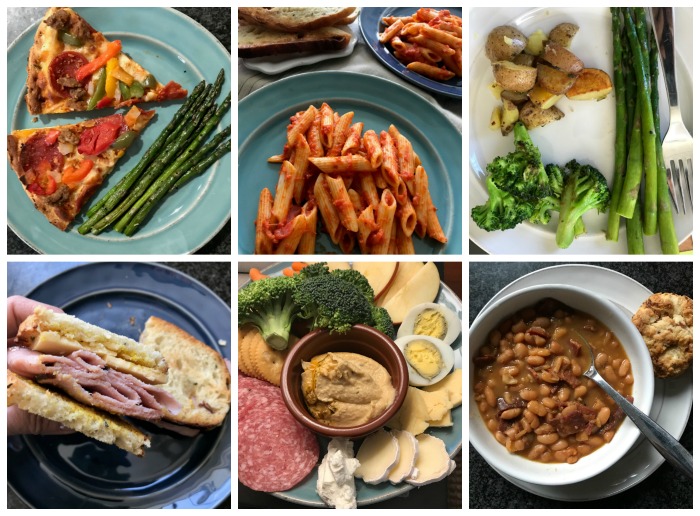 Although I started this blog in January of 2009, it wasn’t until three years later that I decided to see if I could feed my family of 4 for $100/month. I had always kept track of the amount of money we spent on food {as well as everything else} and when I first started writing and sharing stories, I was actually more focused on spending my grocery dollars more locally, on real food. But when the whole double coupon craze started up, I quickly became obsessed with the idea.

But honestly, when we were spending $100 a month on groceries, we ate a lot of processed foods simply because those were the types of coupons big time manufactures were offering. These days, it’s a lot different.

And while there are plenty of different ways to get deals on groceries, I feel like you have to sell a little bit of your soul to get those deals. Downloading a bunch of apps, signing up for store programs {and getting their 10 million emails and notifications} having purchases tracked and then sold to other companies and taking pictures of receipts and bar codes and checking and re checking to see if they were accepted, just doesn’t appeal to me. Not in the slightest. Life shouldn’t be so complicated. 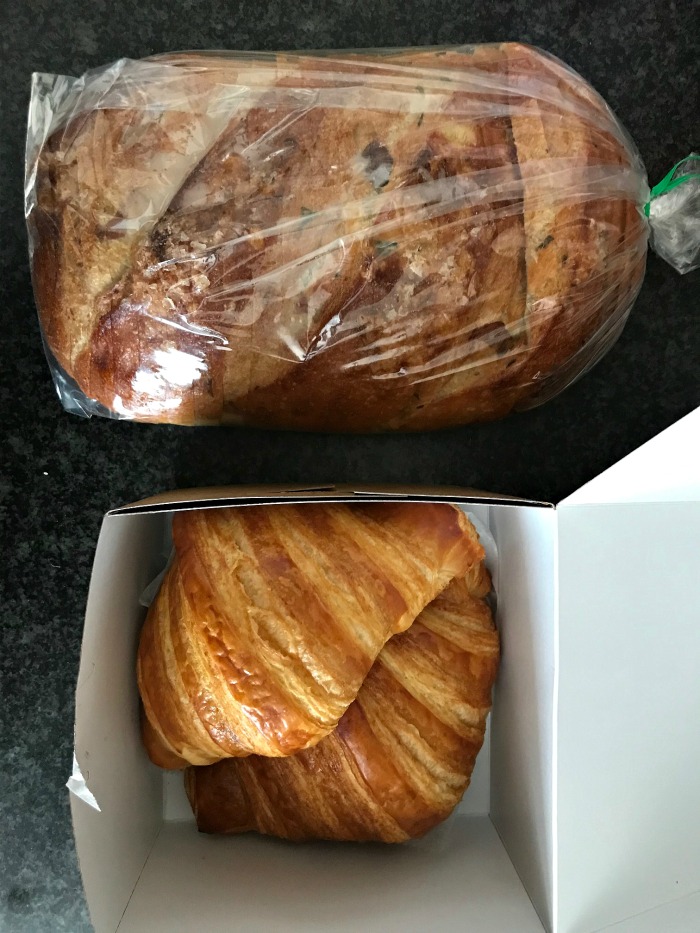 If I really wanted/needed to save money… like a bare bones grocery budget… I’d stick to the following foods: oatmeal, eggs, pasta, beans, rice and spices to jazz things up. I’d grow a boatload of food in my backyard {mostly squash and root vegetables to get my family through the winter months so I didn’t have to preserve them with sugar or fancy ingredients}. It’s how people ate 100 years ago. It’s how many people eat today. It’s really not that tricky.

You can get by pretty cheaply these days if you truly just stick to the basics… no frills kinds of foods.

Back when the kids were in school, I used to cook loads of freezer meals in bulk, and preserved as much food as possible from my vegetable garden. I couponed like mad and over the years I have written about the list of pantry staples I always have on hand and The Best Foods for Eating Well on a Tight Budget. I’ve also written about How to Cut Your Grocery Bill in Half and even did a series on 52 Ways to Save $100 a Month.

But these days, it’s pretty much just the two of us {sometimes The Girl is here, but mostly she’s off working and doing her own thing} and although our grocery budget has increased over the past few years, I don’t feel the need to change the name of the blog just because we are no longer spending $100 a month on groceries.

We have been so insanely frugal over the past 25 years in other parts of our budget to get to the stage in life we are at. The stage where dropping $50 on assorted cheeses has replaced having to pay for a soccer uniform, or a new set of cleats for one of the kids. The stage where we have the time to take a 5 mile walk along the coast several times a week instead of spending hours behind a desk doing something we hate. Getting to this point hasn’t been easy, but we’re here, and we made it. And this is our life now. Things change. People change. Life marches on. 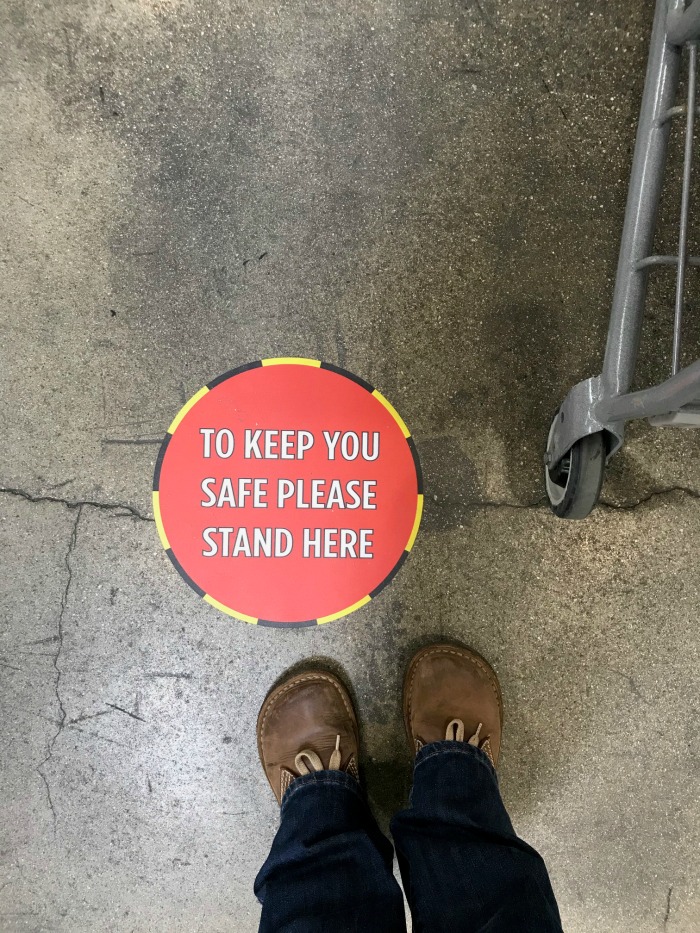 Blah blah blah. Why am I going on about this? Maybe it’s because we went to Costco last week {the first time I had been to one in over a year} and we spent $450.24 on food and {for some reason, I have no idea why} I felt a little guilty about it.

I don’t even know where to begin on this one. Maybe the beginning?

Prepare yourself to be grossed out.

When we got to Costco the HH had to use the restroom so I waited over in the electronics section with the cart. When he found me afterwards he had sort of a funny look on his face and so I was like…. WHAT!? What’s wrong.

And then he told me about the guy next to him in the restroom and how the man stood there doing his business with gloves on his hands. And then the guy zipped up his pants, walked right out of the restroom {with the GLOVES STILL ON HIS HANDS} and then proceeded to put his hands on his cart and wheel it around the store. There was no washing of the gloves, of the hands, of ANYTHING. 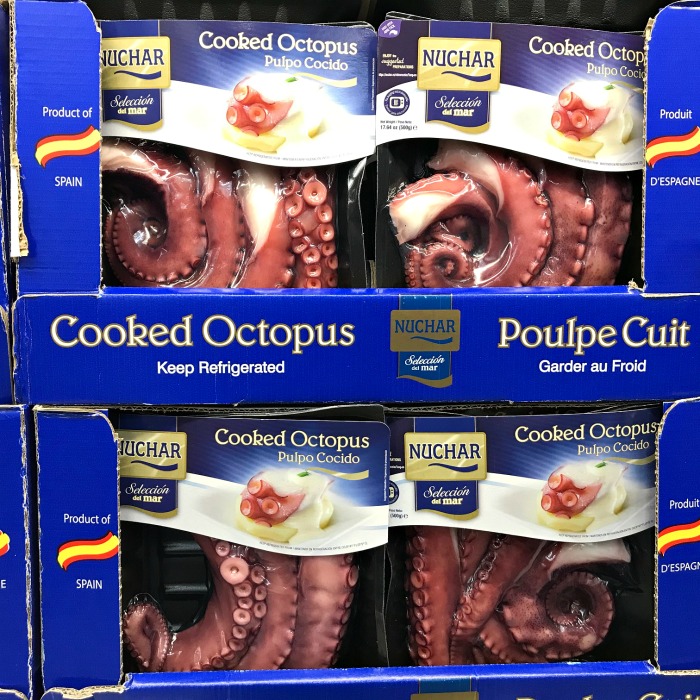 No, we didn’t buy the pre-cooked octopus. 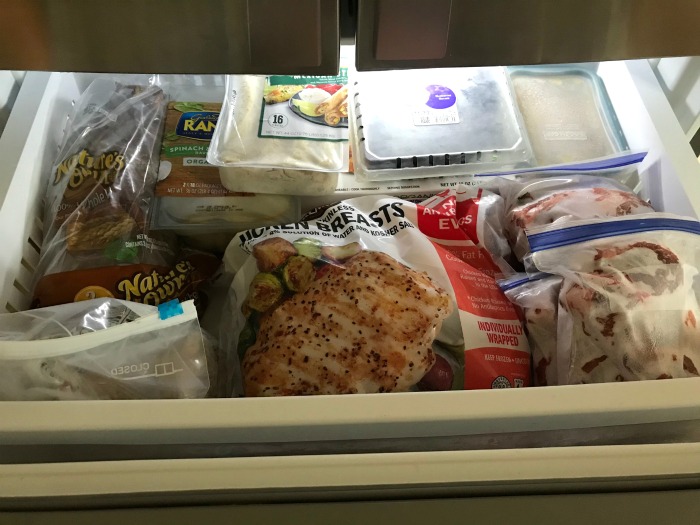 Between the drive to Costco, shopping and driving back home, the whole trip took us about 5 hours. My only concern when we got back home was taking Lucy out while the HH unloaded the car. I hadn’t even noticed I forgot to get a photo of all the delicious food we bought until later that night and by then, I was done for the day and felt zero need to hunt down everything we bought just for a photo. 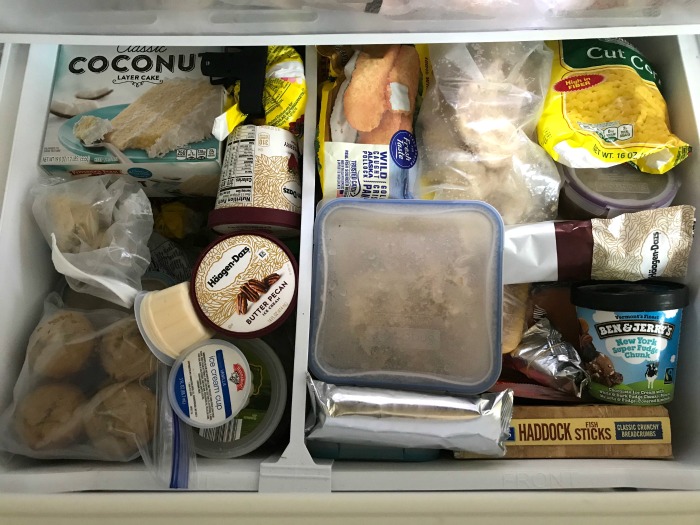 But the freezer and fridge are now stuffed, and if we had to, we could totally go until the end of the year without going to the grocery store again. True, I’d miss fresh milk for my tea and candy candy candy, but we could totally do it {not that I want to test my theory, but it’s a good feeling to have}. 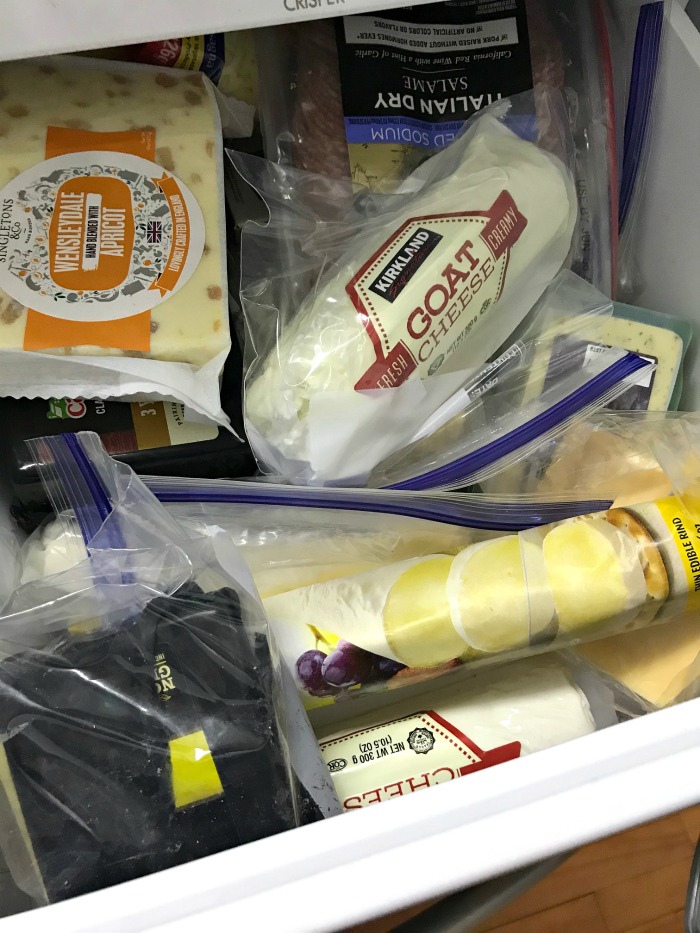 The cheese drawer is full, which is always a good thing. 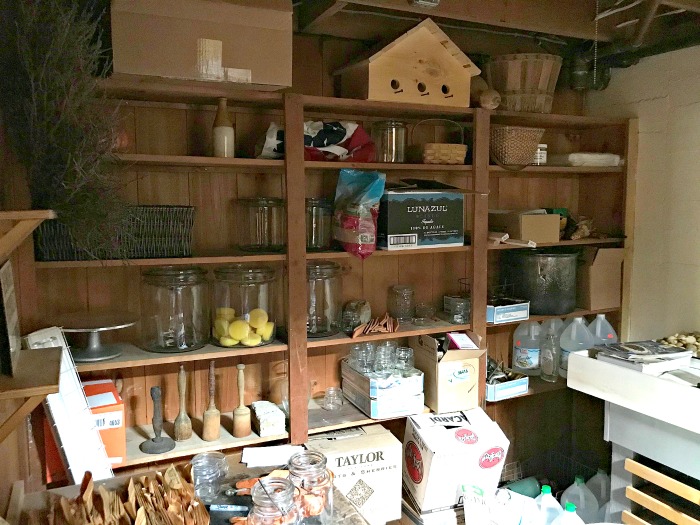 And so now, this week my big project will be getting the root cellar cleaned out, painted and organized for the canning season ahead. Once finished, this area will be our new pantry as the upstairs cupboards are mostly filled with dishes and baking items. I only wish I had a time lapse photo of what this room has looked like over the past 90 years, the different foods that were stored in this room over the generations, what a treat that would be.

Food on your shelves, it’s as good as money in the bank.

Wishing you all the best on this lovely May morning,

Total Spent This Past Week on Groceries, Bakery Treats We Brought Home $463.72 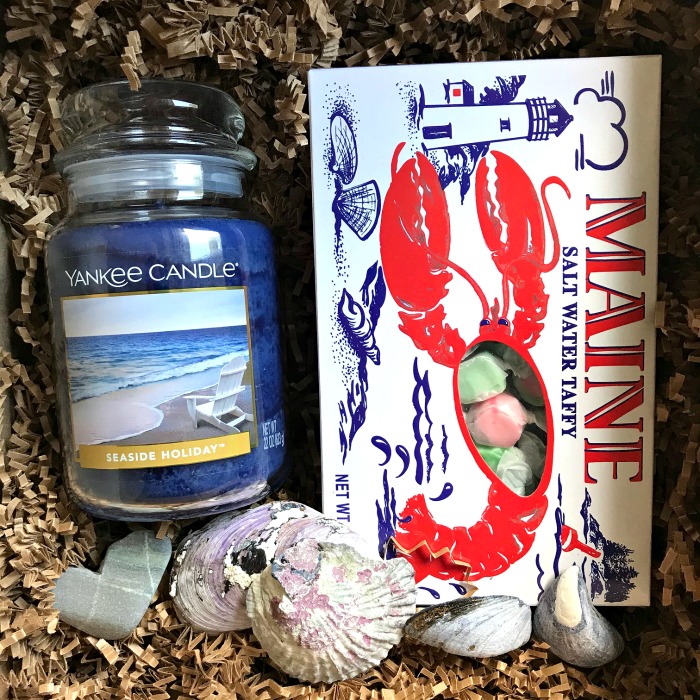 A big thanks to everyone who entered the Seaside Care Package Giveaway. Sue, who left this comment “Take my sister and go shelling again to St. George Island, Florida” was randomly chosen as the winner.

More fun giveaways are in the works, stay tuned. Have a great day everyone. 🙂