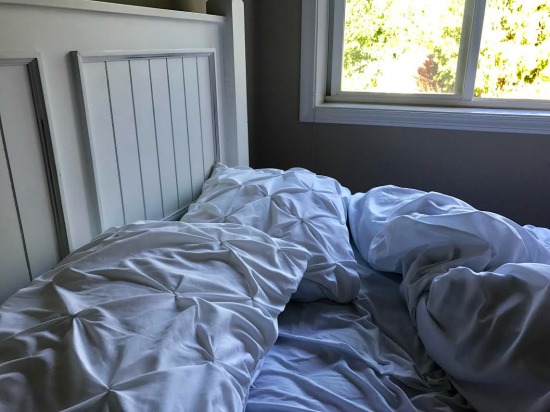 Because of the major head cold I had, the week started off a little rough but ended well so I can’t complain. Thank goodness for the extra bed in the house because with the HH and Lucy both snoring it was nice to have someplace quite to sleep while my head was pounding. Guest rooms are cool that way.

Ya baby! Check out those numbers. Think I can get to under 10 by the end of the year? I called the HH at work the other day and told him we made another 5 additional principal payments towards the mortgage for July and he was pretty excited about it. Up until the beginning of this year he really wasn’t that optimistic about my little plan. He didn’t think making extra payments would make that much of a dent. Ha! Little did he know that once I started, I couldn’t stop and now all I want to do is pay this sucker down so we can skedaddle out of here and never have a mortgage payment ever again.

It’s hard to believe we’ve been here 2 years and 9 months already. The plan was to sell right at the two year mark but home prices are going crazy around here and we are pretty close to our “let’s blow this Popsicle stand” selling price. If we could go back in time we would have gotten a 15 year mortgage. But since we are nearing the end of our stay here in the  neighborhood, it wouldn’t make sense to pay the fees to do it. Lesson learned. Life goes on and the mortgage has become my favorite bill to pay each month now that we are making some major headway.

Many people have asked why bother paying down the mortgage when we could just put that money in a savings {or some other type of} account. Here’s my theory: Out of sight, out of mind. If we can’t have instant access to it, we can’t spend it. So it’s pretty much a forced savings, PLUS with each extra principal payment we make, we are saving money on the interest of the loan. It works for us. 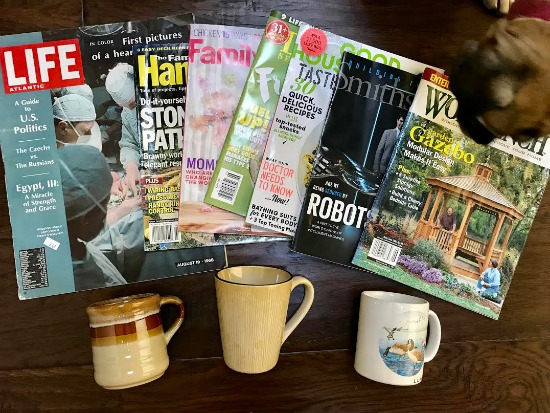 Do you take the time to look through the free boxes at thrift stores and garage sales? The Girl and I always do. We snagged 7 magazines and 3 coffee mugs last week but when we brought them home the HH just rolled his eyes at our treasures. What a nut.

Mrs. HB sent me a text about an Italian bakery she stopped at in Tacoma and told me they had good cannolies. I can’t imagine there’s a bakery out there that beats Mike’s Pastry, but next time I’m in the area I’ll stop by and take a look. The HH LOVES cannolies so he can be my taste tester.

I think I’ll pick up some milk at Fred Meyer this morning and then go ahead and have a no spend week next week. I have a hard time shopping in crowds {it makes me itch} so I  made sure and picked up enough stuff this past week to last us a while. The stores are getting really overcrowded here and with it being summer and all, there seem to be more people out and about more than ever.

So far I have 8 rug hooking patterns listed in my Etsy shop with 3 more drawn out but not completed. I’m having a hard time finding time to squeeze some rug hooking in lately but as long as I get 12 patterns done by the end of the year… I’ll be happy. 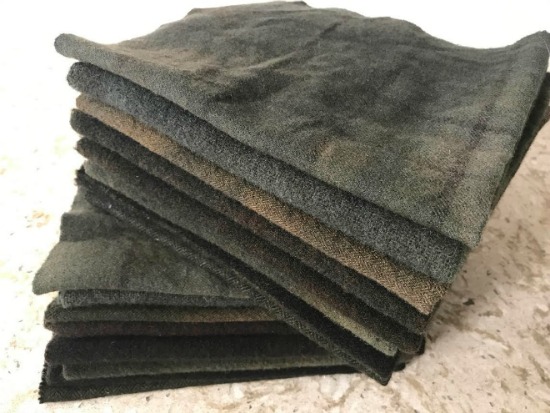 So far this year I’ve made $4355.31 Etsy shop this year. I didn’t sell a single item last week {which is typical for this time of year} but I am working on items to list this fall as well as dyeing wool to sell {and use}. To everything there is a season… and for me and rug hooking, that’s fall and winter. 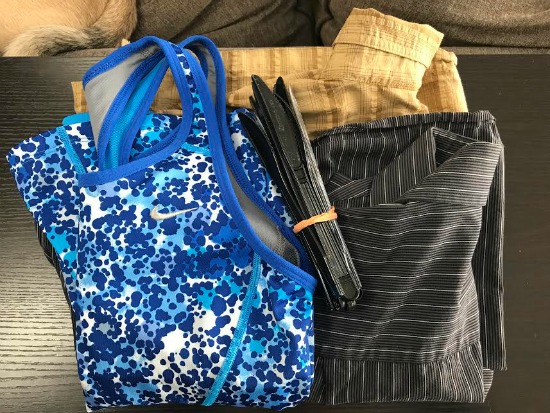 The man speakers have left the building!!!! Yes! While the HH was preoccupied, The Girl and I snuck all six of them plus some black box that does something in his truck right before he left for work one morning. I don’t think he was amused but hey man, they’re gone. 🙂

Also, I found two more shirts, decided the athletic tank top I picked up last week at the bag sale didn’t fit right and gathered up a bunch of plastic knives for the yard sale as well. That brings my total to 223 items purged from our house this year. Giddy up!

I tried it and decided it’s not for me. 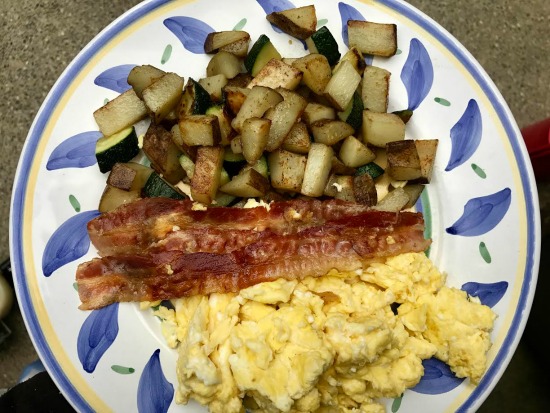 Sunday breakfast. It’s pretty much the best way to start a day filled with honey do requests. 😉 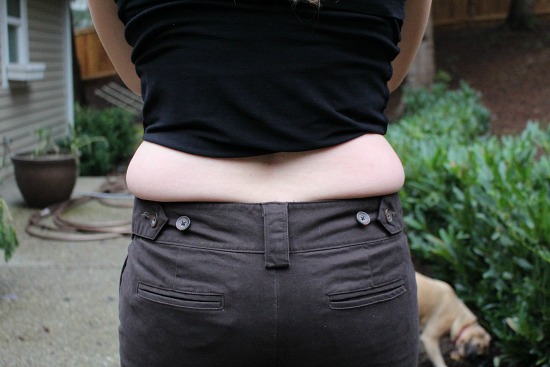 I’d like to take this opportunity to thank the HH for getting me sick last week thus giving me less of an appetite which of course helped me to check Muffy the muffin top off my list of goals for this year. Well, I’m sure all the gardening I did outside this week and the fact that I didn’t eat any sweets helped me cross the finish line too. 😉 As you can see from the before photo {January 1st, 2017} I had a little overflow when I put on my brown pants at the beginning of this year. 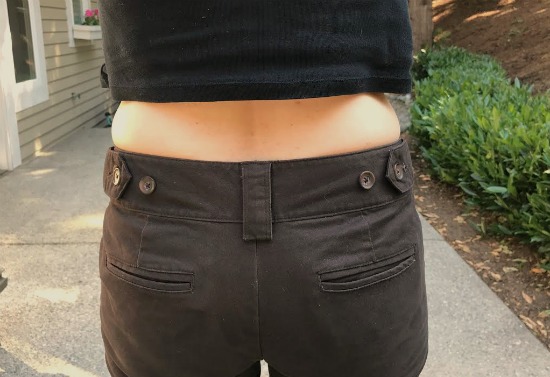 Even though I’ve picked up a few things second hand, I have been able to wear out a few items rather just just toss them into a donation bag this year. It feels good to have spent less than $50 on clothing and shoes in the past 6 months.

I have so many recipe photos on my phone it’s not even funny. Seriously, I think I’ve already tried 52 new recipes this year, I just need to get them on the blog. 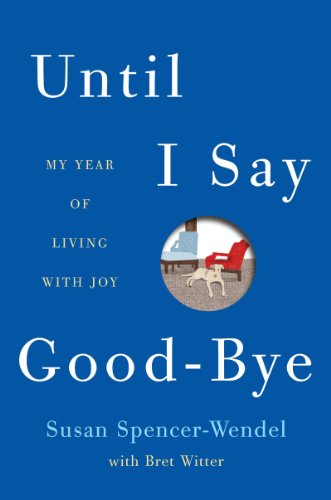 I’ve been listening to Until I Say Goodbye on audio book this week {I’m about 3/4 of the way through it} and even though it’s obvious how the story ends, the author talks about choosing JOY in the last year of her life after finding out she has ALS at 44. Sad, but funny, and well told. Real stories, told by real people. My favorite kind of book. 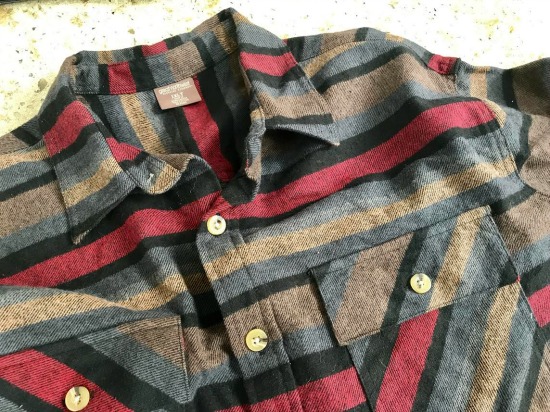 Last week The Girl and I checked out a Goodwill Outlet store {have you ever been to one before?} and while I was there I found a new {with tags} men’s flannel shirt. It wasn’t something my husband would wear but it was really nice so I hung on to it as we looked around. Yada yada yada, I decided a good way to give back to my community would be to collect a bunch of warm long sleeved shirts this summer and then donate them to a local shelter this winter. It will probably take me a couple of months to find one hundred dollars worth of shirts… but I think it’s kind of a cool way to give back.