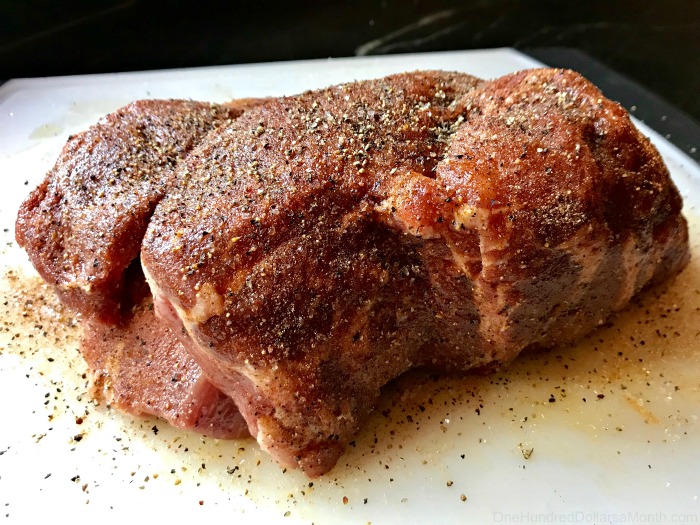 My husband. He researches everything to the nth degree before buying something. It doesn’t matter if we’re talking about lawnmowers or insoles for shoes, that man, he likes to make sure he gets it right the first time. 😉

Is your husband like this too? Does he make you CRAZY? 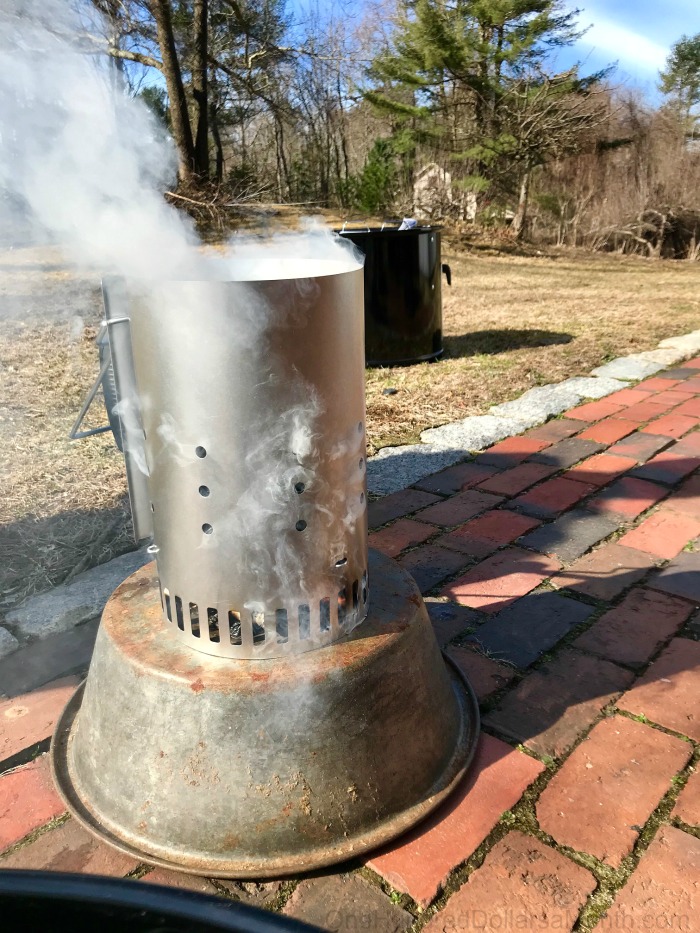 Well, towards the end of last summer he started talking about BBQ’s and how we needed one {even though in previous years we’ve only used a BBQ like 4 times during the summer season}. We left our old gas BBQ behind when we moved and so we were starting from scratch.

Or rather, he was starting from scratch. I told him very early on in the BBQ researching process that I had absolutely no interest in cooking meat on a hot grill in the middle of summer in the New England humidity. So this decision, this purchase, was all on him since he was going to be the one doing all the work. {Which come on now, how clever was that on my part? VERY CLEVER, very clever indeed.}  😉 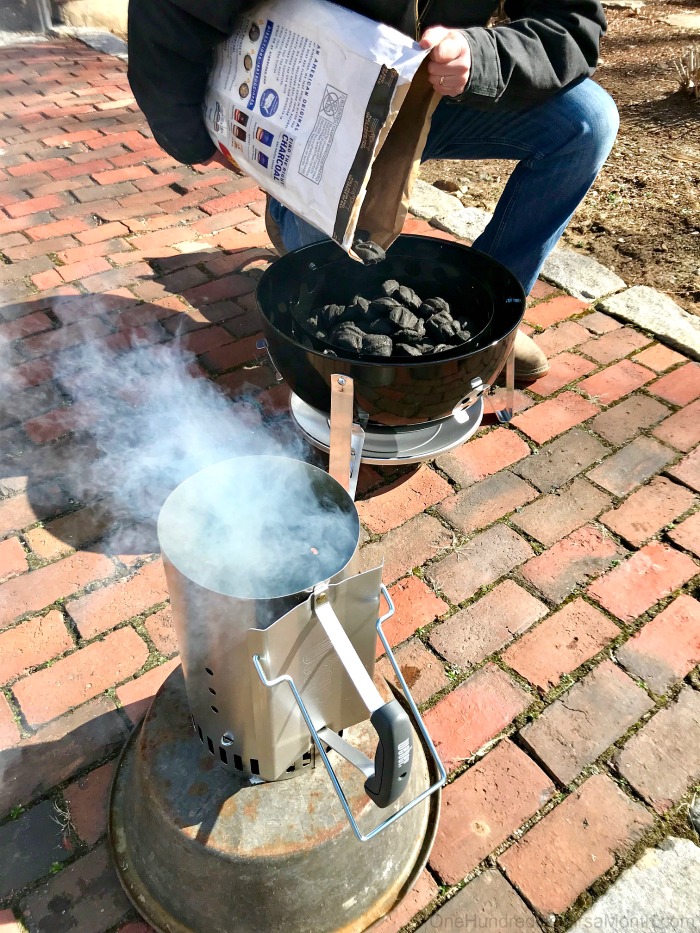 So, after 6 months of researching BBQ’s online, watching BBQ videos and researching the proper tools and what not, the HH finally decided on a Weber Smokey Mountain Cooker 18 Inch Smoker. Which, totally wasn’t the gas grill he had in mind when he started out on his little BBQ research adventure. {This is where I would add an eye rolling emoji if I knew how to do it.} 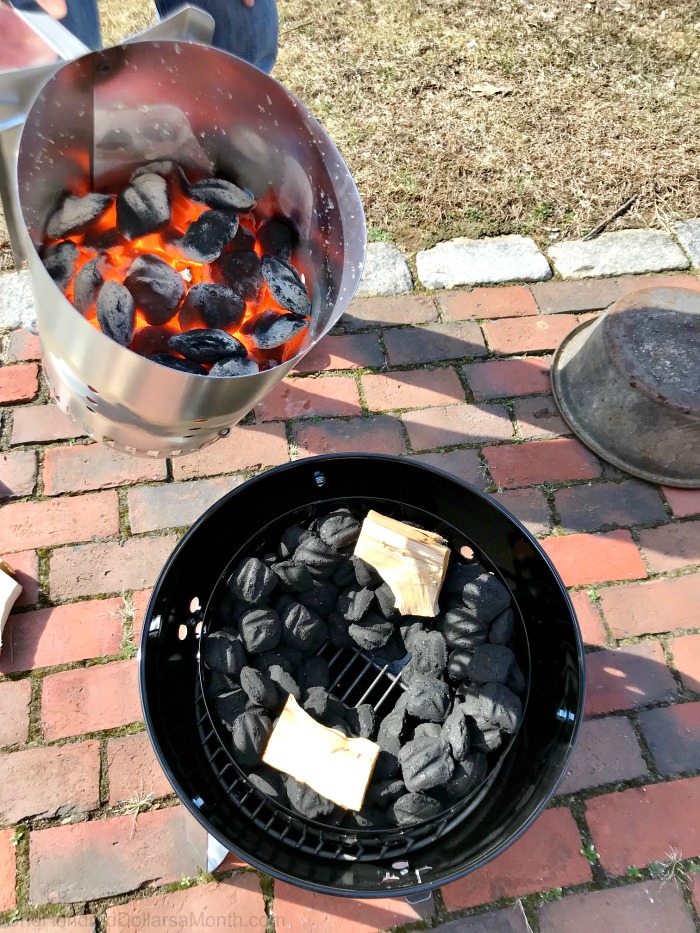 And of course, because you just can’t have a smoker…. he also bought a Weber Rapid Fire Chimney Starter because apparently you’re supposed to heat the briquettes in the little chimney starter thing first, before adding them to a round of fanned out briquettes at the bottom of the smoker. 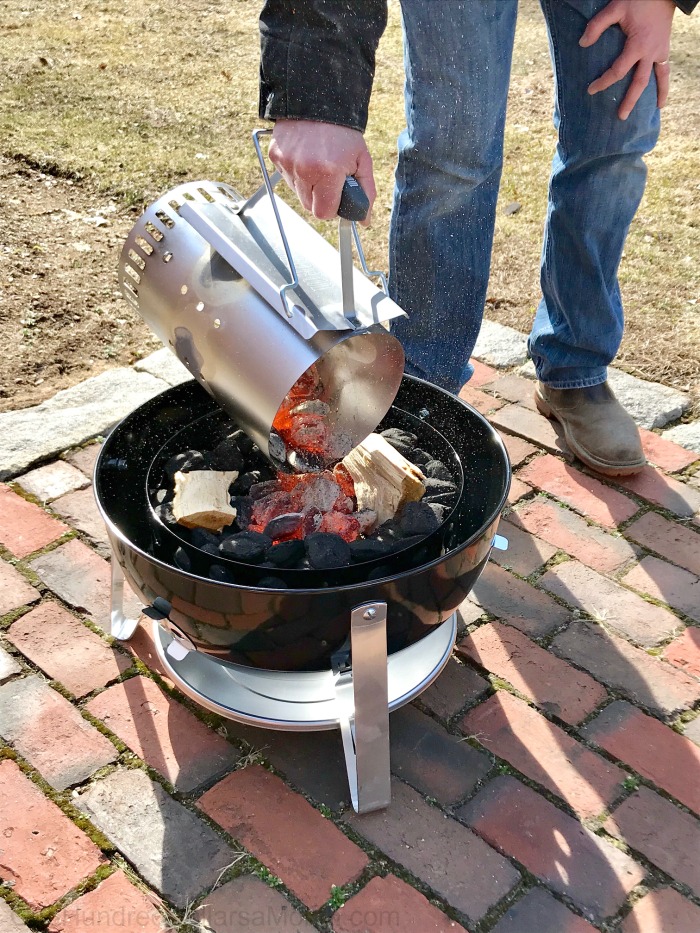 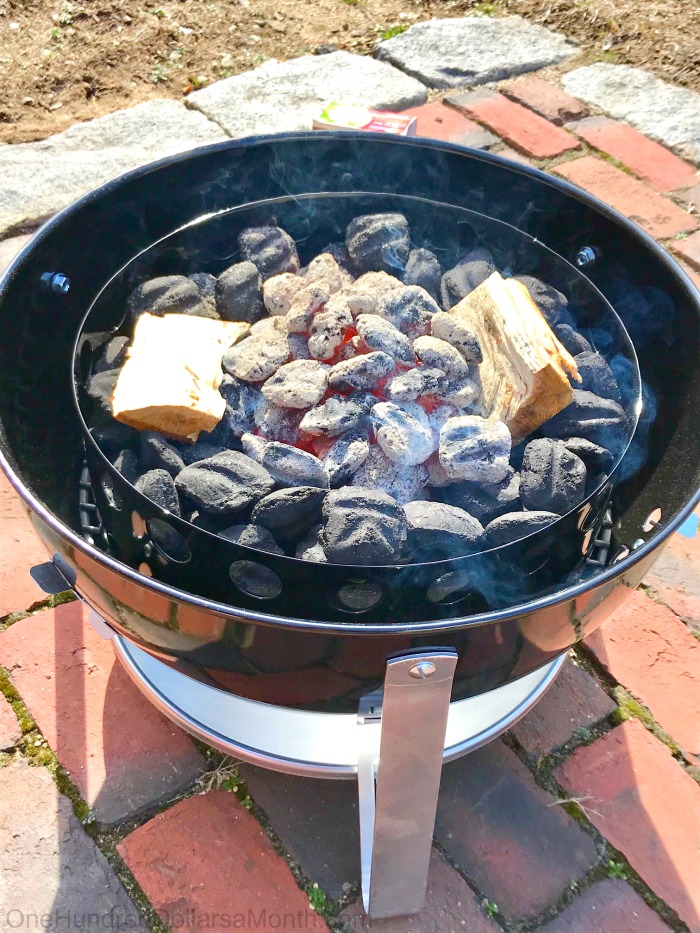 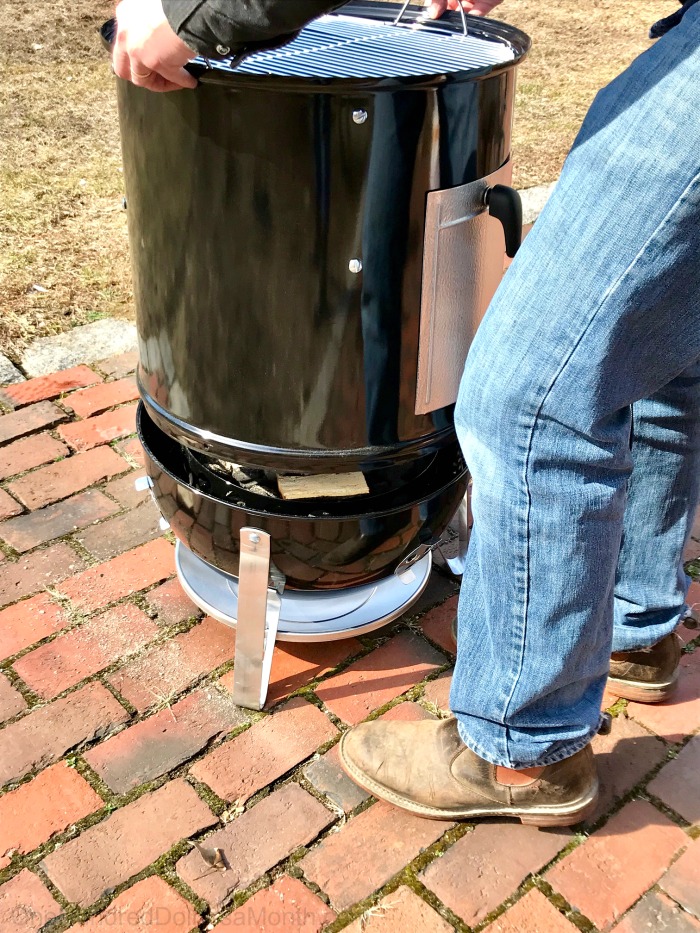 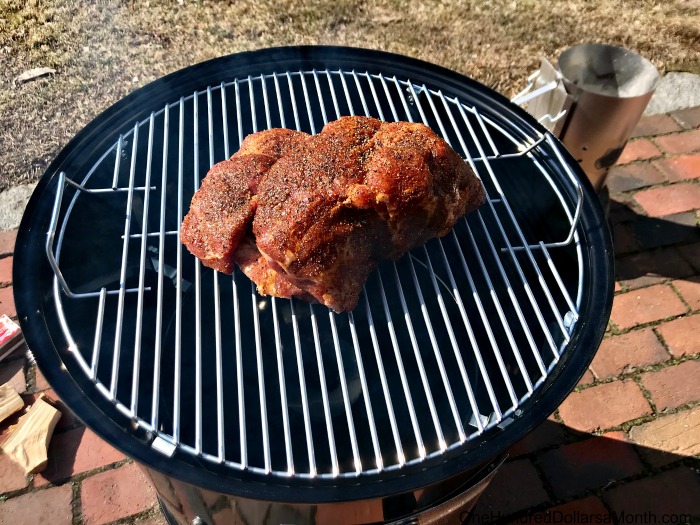 For his first BBQ adventure, he chose a 5 pound pork shoulder and added equal amounts of salt and pepper, along with about a tablespoon of garlic and onion powder each. He told me he wanted to start with an inexpensive cut of meat {$1.16 lb} on his first try because he wasn’t sure how everything would turn out. 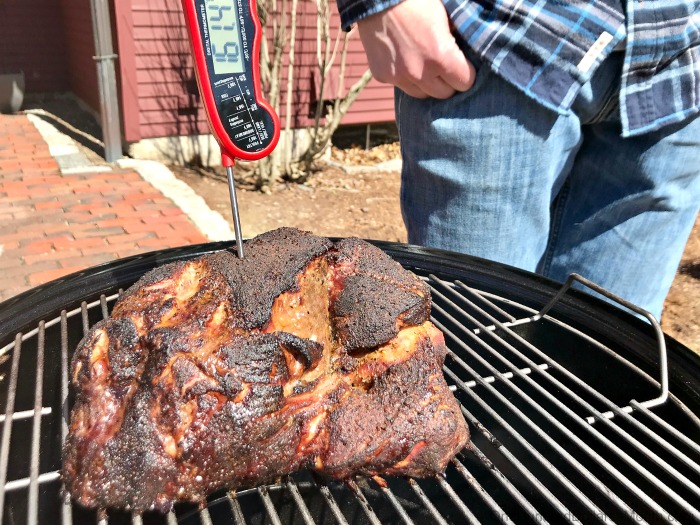 His 6 months of research also told him to buy a meat thermometer and to get the internal temperature of the meat to about 200 degrees while maintaining the smoker at about 275 degrees. There was a little pan in the smoker he added water to to help regulate the heat. This is what the pork shoulder looked like about 3 hours into the cooking process. 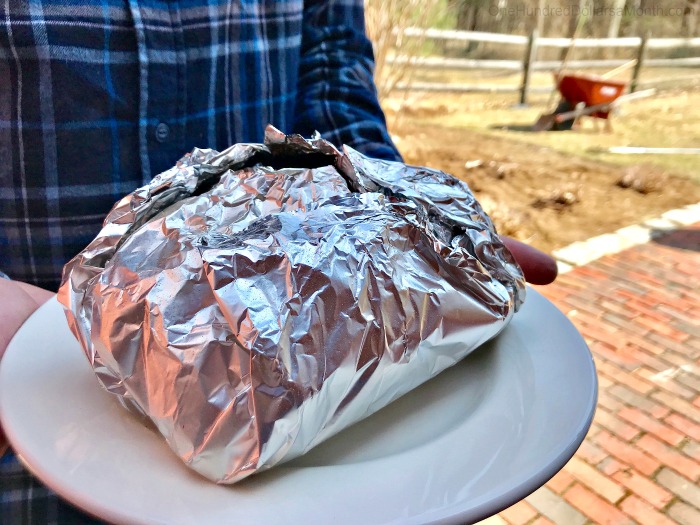 5 1/2 hours later… he bundled up his little bundle of joy with foil and brought it into the house to rest for an hour on a plate. 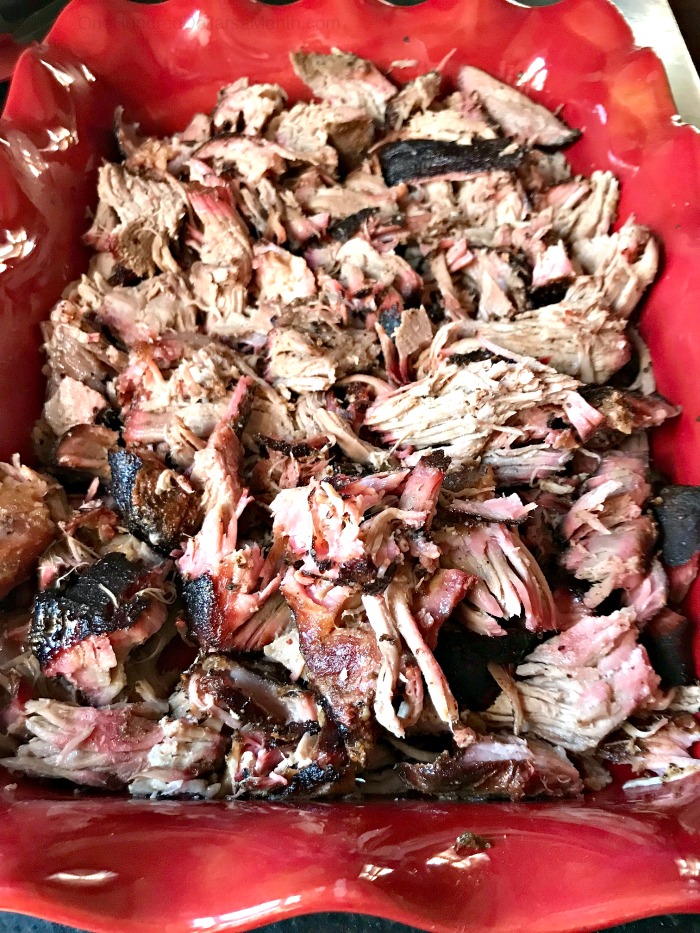 And this is what the pork shoulder looked like after 5 1/2 hours in the smoker. The results were delicious! We had planned on making little street tacos with shredded lettuce and sliced tomatoes but we were both so exited and instead just stuffed the pulled pork into sandwich rolls and gobbled them up as fast as we could.

Well done HH, well done! Not to shabby for your first try. 😉

Do you own a smoker? Do you have any tips for my husband? Do you have anything special you do to your meat before cooking it? Favorite spices or rubs? I know he’d love all the help he can get.

Have a wonderful Wednesday everyone, enjoy the sunshine.

Tools and Gadgets the HH Used: