It’s not often I post a bad review on the blog and I had decided I wasn’t even going to share our trip to the 2019 Connecticut Garden Show in Hartford, Connecticut with you until Tracy left a comment yesterday about her less than exciting experience with the garden show and I knew, I wasn’t the only one who felt the same way.

I know a ton of hard work and effort go into these type of events, and that you cannot please everyone {I truly get that} but I firmly believe if there are billboards up all over town telling people your event is “One of the largest and most prestigious flower shows in New England” and you are going to charge an admission price of $18 per person, and people are going to set aside a big chunk of their day to attend your event, you should at least attempt to knock their socks off.

Well, I’m here to report the HH and I both left with our socks on.

But then again, maybe once you’ve been to a truly stellar garden show like the Northwest Flower and Garden Show in Seattle a bunch of times, the bar has been set too high. 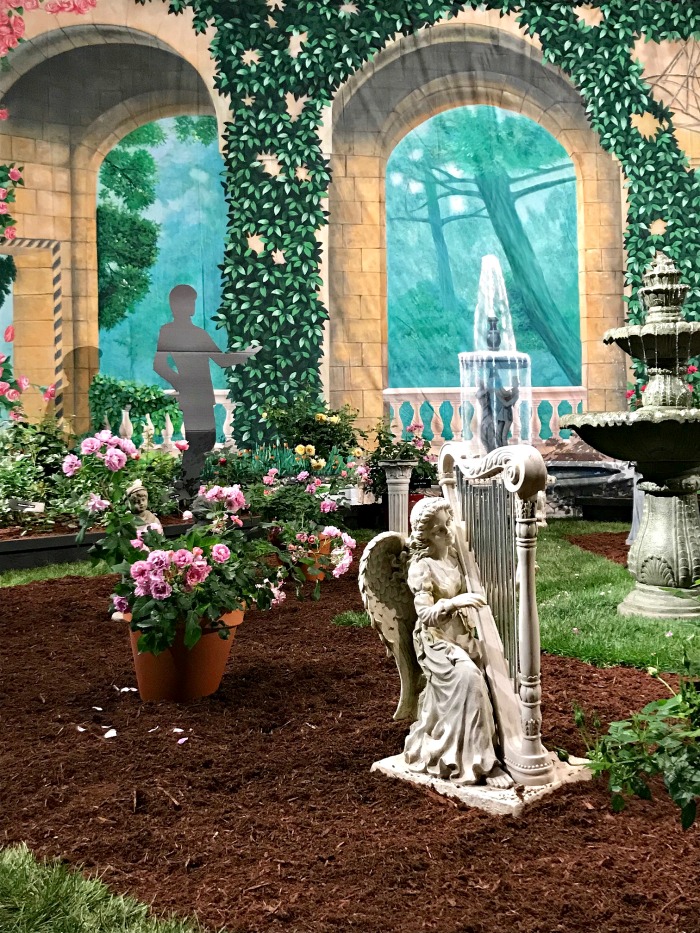 The first “display garden” as you walk into the venue. A giant screen printed sheet as a backdrop, a cardboard cut out of a person, a couple of rolls of sod, beauty bark, a couple of potted plants, a fountain and a statue. 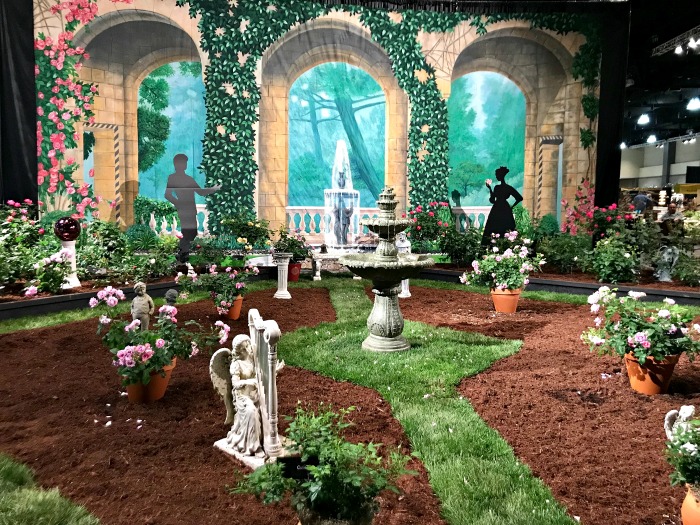 I’m pretty sure I could have purchased everything above {with the exception of the backdrop} from the Home Depot and put this display together by myself in a couple of hours. 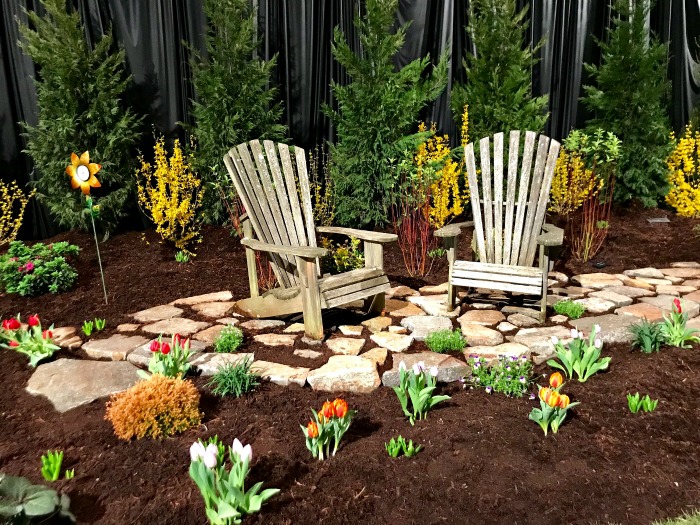 The same goes for this display garden. 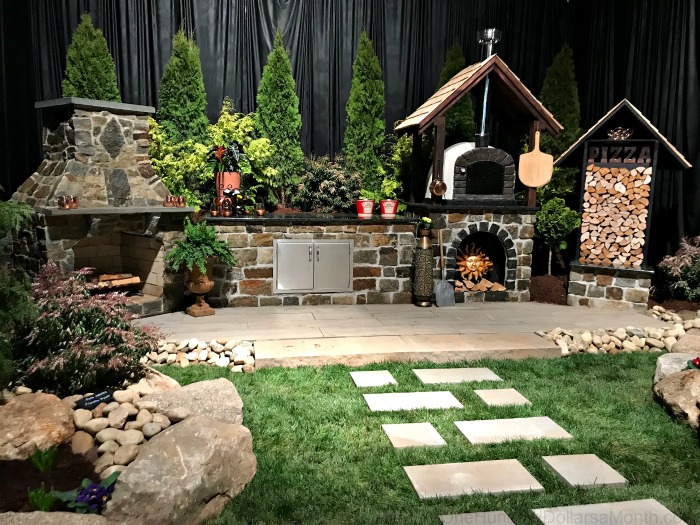 This was probably the third best display of the entire GARDEN show. An outdoor pizza oven and bbq patio. 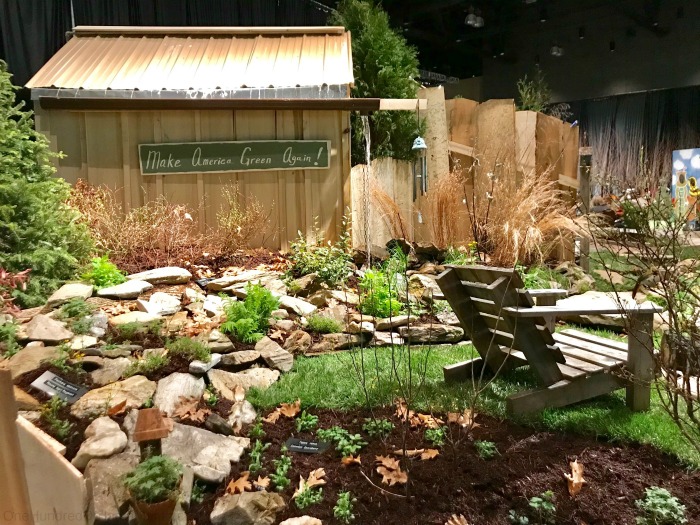 The second best display in my opinion went to the Make America Green Again peeps. Even though there was a lot of sod and bark {which seemed to be a reoccurring theme}, they actually made the effort of to haul in slate and river rock and stagger a bunch of different plants for a more natural setting. 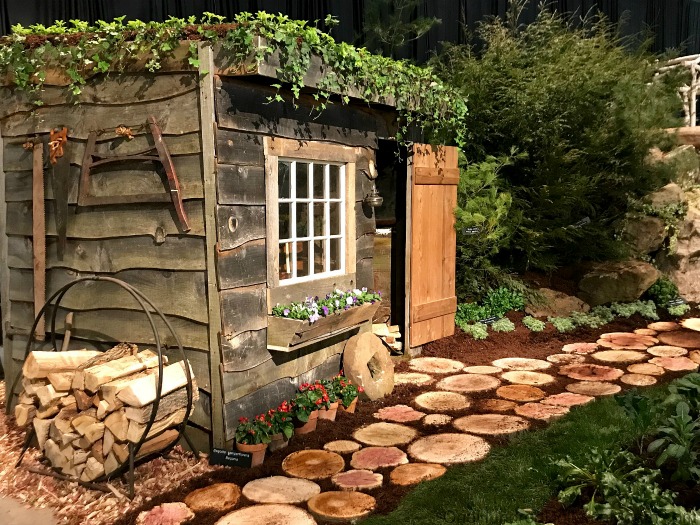 Now this is what I would call a proper garden display. This gorgeous potting shed was BY FAR the best display garden in the entire show.

Focal point: The potting shed, or wait maybe it was the hollowed out log, or the cascading plants.

Depth : They did an excellent job of using a variety of plants as well as installing a pond. My eyes went up and down and all around and there was something eye catching at every turn. 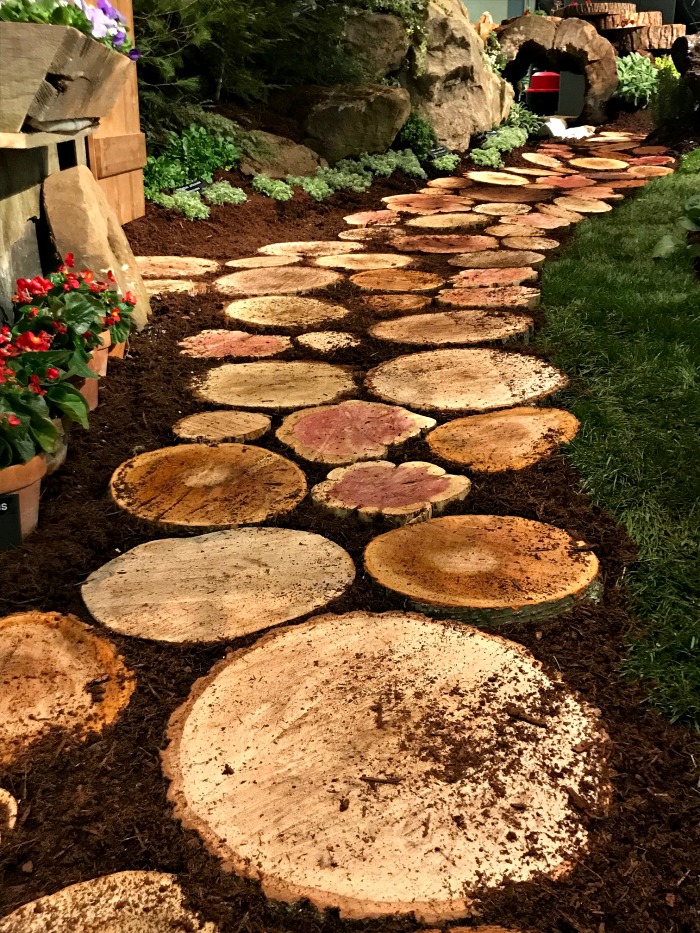 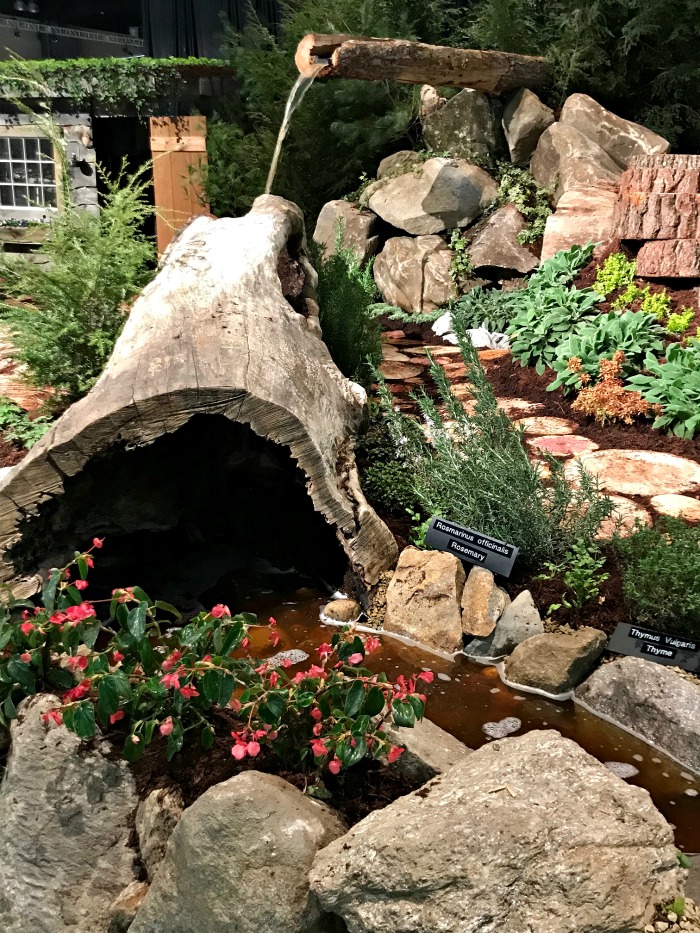 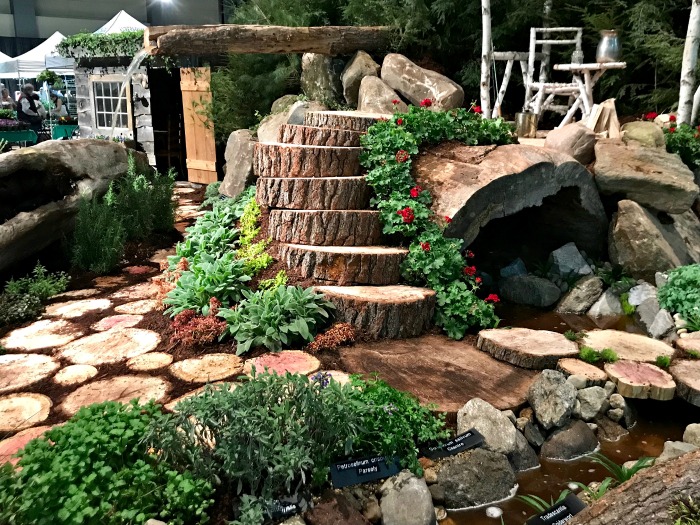 As far as display gardens went…. those should give you a general idea of what we paid $18 to see. 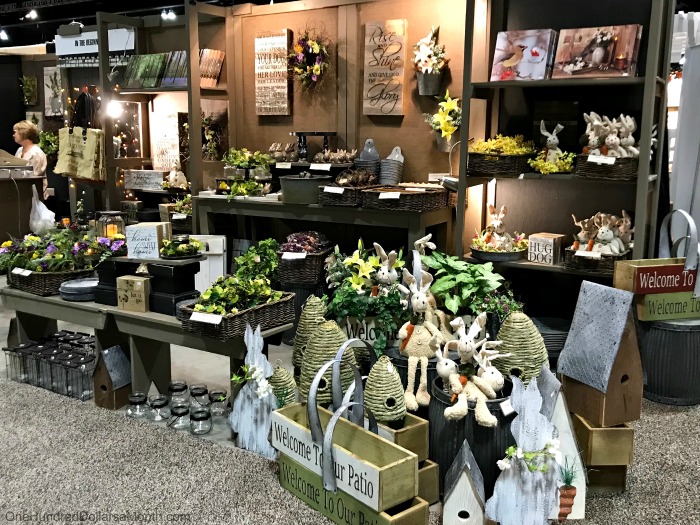 And then there were the 300 display booths.

The booth above, was one of the better ones. And although there wasn’t anything terribly unique, at least they didn’t have a totally tasteless doormat that read Sorry, We’re Stoned or an Open Door Policy doormat for sale like the vendors a couple of rows over. At least this booth fit in to the whole garden show theme, even if everything they offered could have been found at a Home Goods or a Hobby Lobby type store.

Other than a grandma selling her knitted hats {which I found odd, for a garden show} and a couple of jewelry booths, there wasn’t much in the way of unique artisan type booths like you would see at the Northwest Flower and Garden show. {Bob Bowlings and Tuli Fisher come to mind} There was one guy who was selling beautiful handmade wooden inlay mirrors {priced around $1,800} but his booth seemed so out of place when compared to the guy the next row over selling cheesy plastic {Made in China} toy water guns you could find at Walmart for $5.

It was almost as if there was no juried application process for vendors. As an attendee, it was a bit confusing. If I would have paid to sell my wares at this show, I would have been terribly disappointed. 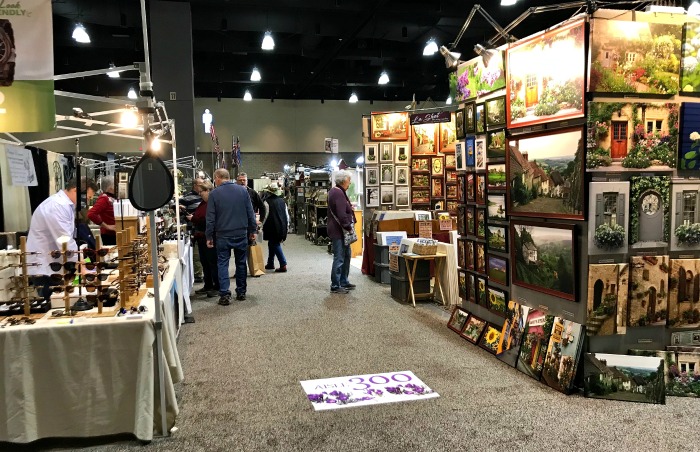 This was one of the better display booth end caps of the show.

Had we of known we’d be walking a gauntlet of hot tub booths, lotion samples, a MLM company selling stretch pants, some guy selling peanut butter, or a bunch of other random and totally out of place fairground type booths, we would have saved our $18 and stayed home. 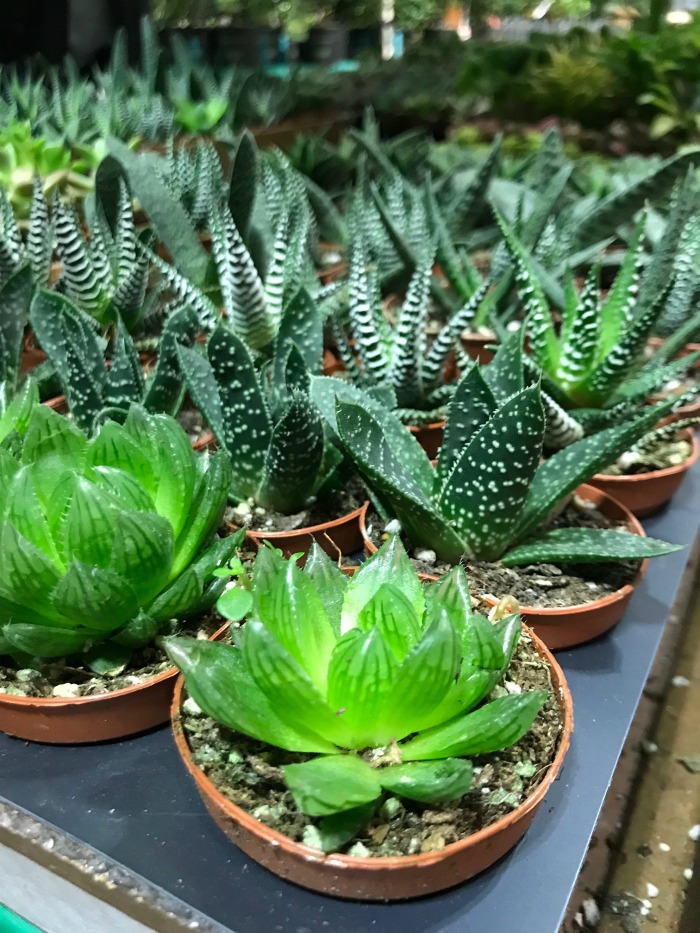 As far as actual garden products/plants for sale, I recall a few booths selling seed packets, one booth selling lily bulbs and another selling mini aloe and cactus plants, you know, like the ones you can buy at the Home Depot for $3. 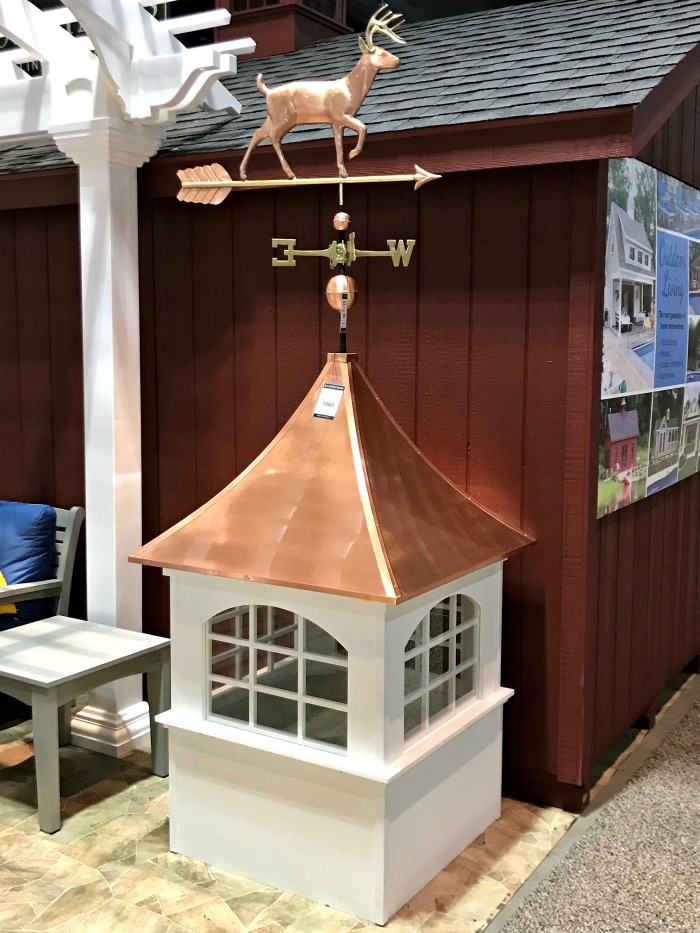 Don’t get me wrong, there were a couple of nice booths, like the one from Snug Harbor Farm {who had a beautiful display of house plants you could purchase} or the other one selling a handful of potted spring bulbs, or the company selling cupolas, but overall, for a garden show…. the whole thing was seriously lacking. 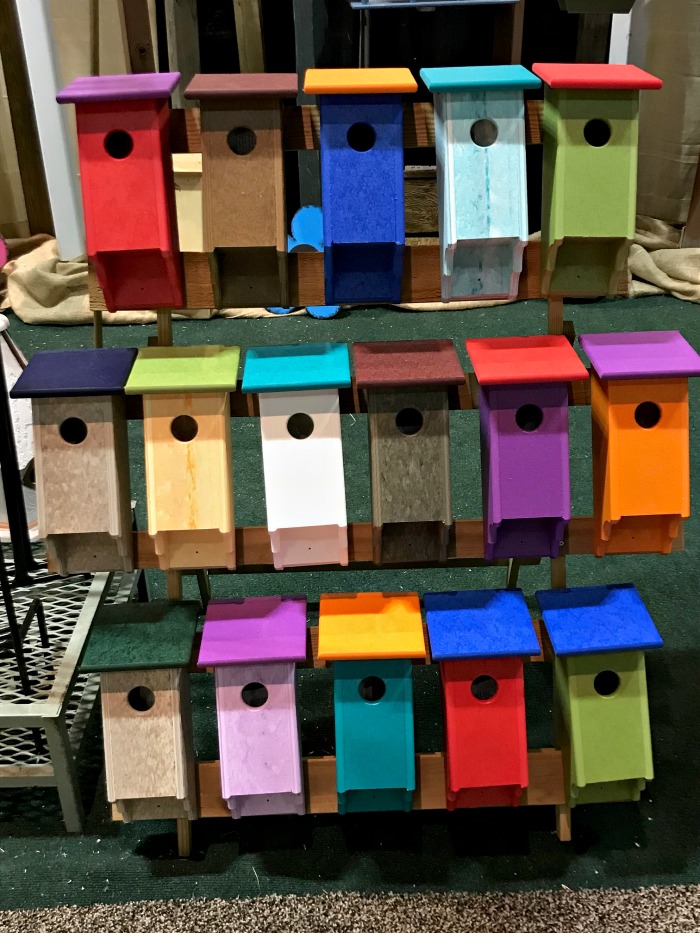 This was somebody’s display booth. Birdhouses on a single rack. 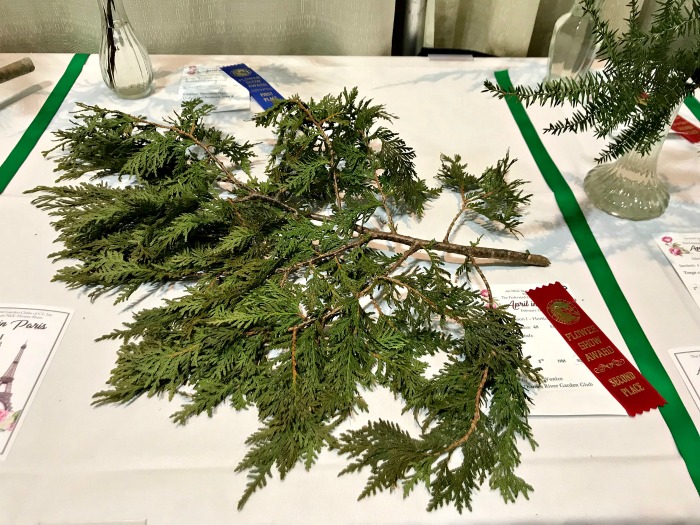 I can’t believe I paid good money to see this branch.

Note to self: Take clippings from around my yard, set up a booth {maybe throw a curtain over the front of it first} and charge people walking by $5.00 to lift the curtain and look at my plants. Also, be sure and post a large sign that says NO REFUNDS allowed. 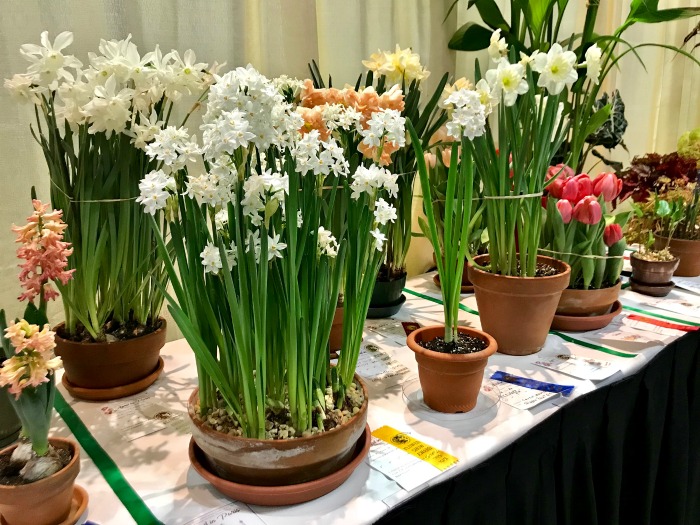 I think juried plants and tree branches have their place. And it’s at the county fair. Not taking up space at a garden show where people are shelling out $18 for a ticket and expecting to be dazzled. 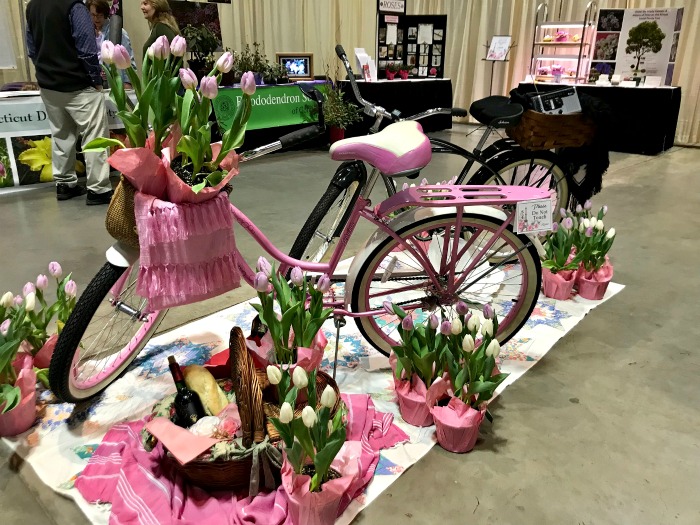 So there you have it. My opinion of the 2019 Connecticut garden show in Hartford, Connecticut. It was a total dud. There was zero wow factor and we were in and out in 46 minutes flat. We both wanted our money back. And YES, we made sure to go up and down each aisle, and look at every single display, and still…. it was a stinker.

Bigger, isn’t always better {take the Maine Flower Show for example, it was a much smaller venue, and beautifully done}. Some events just aren’t all they’re hyped up to be. And others, well, they knock your socks off.