I am not going to lie, I am soooo excited about the prospect of getting to raise baby chicks this spring for Mrs. Hillbilly.  Granted, I don’t get to keep them, but I think I can live with that for now.  Isn’t it nice when old neighbors without strict HOA’s allow you to live vicariously through them?

If you are planning on getting baby chicks this year {and I really, really think you should}, here’s a quick tutorial on how to take care of them.  I’ve posted it before, but thought it might be worth revisiting for any backyard chicken farming newbies:

For the first several weeks of your chicks’ lives, you’ll need a warm place for them.  The container is called a brooder, and you can use about a zillion different types of containers to do this from cardboard boxes to stock tanks.  You’ll need a warming light {that will satisfy the warm part of “warm place”}.

Also, you’ll want absorbent bedding {you will not believe how messy little tiny chicks can be}, a feeder, waterer, feed, grit, and netting or chicken wire {to put over the top of your container to prevent runaways}.  To set up your chicken brooder, lay a thick layer of bedding down along the bottom.  Place the feeder and waterer, filled, into the center of the chicken brooder–also sprinkle some feed into the bedding to encourage the chicks to scratch.  Then, clip the warming light onto the side of the brooder and position it over the opening.

Once your brooder is set up, you are ready to add baby chicks.  Whether you ordered the chickens online {I like to get mine from mypetchicken.com} or bought them from the feed store, they will likely be a little thirsty and stressed when they arrive.  Put a little sugar water in their waterer for the first two days and dip their wee little beaks into the water as you place them in the brooder to encourage them to drink.

For the first week, you’ll want the brooder to be 95 degrees. You can drop the temperature 5 degrees each week until you get to 70 degrees.  Hold at 70 degrees until it’s time to move them outside.  Keep their feeder stocked and check on their water several times a day.  They have an uncanny ability to tip their water, poop in the water, and in general, drain their water.  So, you’ll find yourself filling it pretty often.  Also, because they are going to literally quadruple in size over the next couple of weeks, you’ll find that they are big giant pigs when it comes to eating. 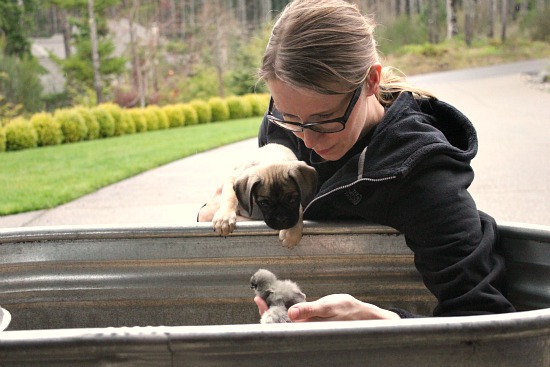 At about 4 weeks, it’s time to transition them to outside–slowly.  It’s like hardening off plants, really. You want them to acclimate at a nice slow pace.  Start that 4th week by placing them next to an open window or door.  Let them experience the natural light and fluctuations in temperature.  It’s a harsh world out there without warming lights-they are going to have to face it, like it or not. 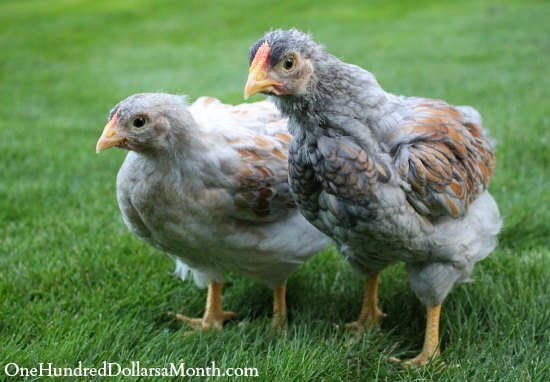 If your weather is fairly mild, you can fully transition them outside somewhere between 5 and 8 weeks. Remember night time temperatures will need to be mild too.  If you are adding them to an existing flock, I like to set them in a caged off area right next to the existing flock for several days.  L 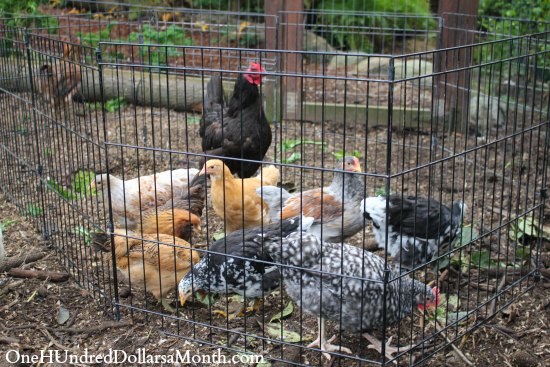 This allows the flock to see them, without really being able to peck at them.  After the holding pen period, go ahead and put them right in with your existing flock.  They may get pecked at a bit by the older hens, but in general, they’ll learn the pecking order and fall in line. 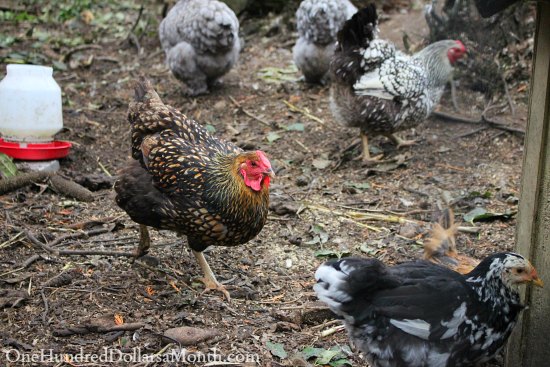 If you are starting a flock for the first time with your baby chicks, transitioning them to outside is easier.  First, transition them solely to the coop. Keep them in the coop for several days {assuming it has a run}.  This will allow them to get settled.  If you are going to have free-range chickens, remember they are still fairly small, and it’s important to keep them out of predators’ grasp–so a run is best to keep them safe.  As they get older, they’ll learn to hide in the bushes or coop when they hear/see danger {i.e. a hawk or the like}.  Make sure to shut them into the coop every night to keep raccoon, etc. from getting to them {depending on your area, of course}. 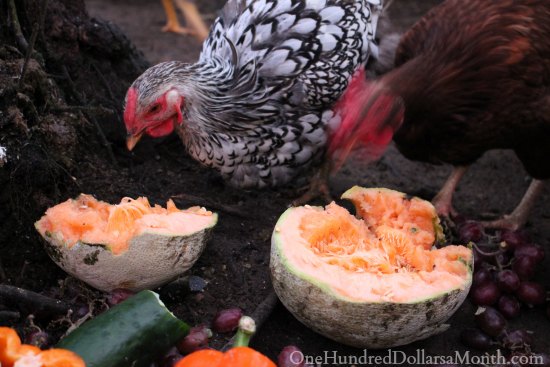 Once you have established your coop, remember to change their bedding, or put a fresh layer on frequently.  Continue providing fresh water and plenty of food/scraps.  Your ladies will not start laying until around 20 weeks, but in the meantime, they will create plenty of potential chicken poop compost…and seriously, I am not lying when I say that your garden will go nuts with this stuff.  So make sure to use it.

Will YOU be getting chicks this spring?

28 Ways to Slash Your Grocery Budget

I'll be listing a few new pieces to my Etsy shop:

"A plump wife is a gift to the farmer, his garden

Raspberry Blueberry Jam! Another winner. At this r