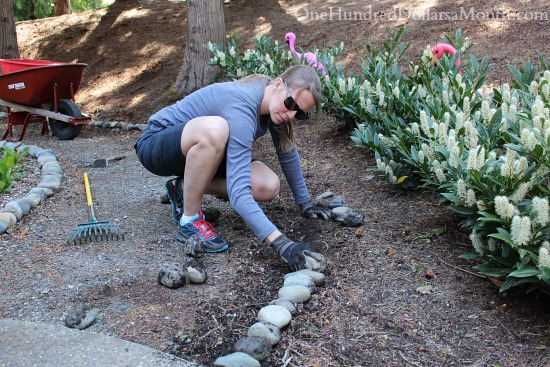 Where do I begin?

How about the very first day.

I’d actually like to tell you about some things that happened a little sooner than that, but those little gems, I’m gonna save for the book I’m going to write someday. 😉

So here we go.

We moved in on a Monday afternoon and after a few hours of unpacking, I took Lucy the puggle princess for a walk around the neighborhood. 5 minutes into the walk, I pass a lady {also walking her dog} and she says…. “I know you, you’re on Facebook.” 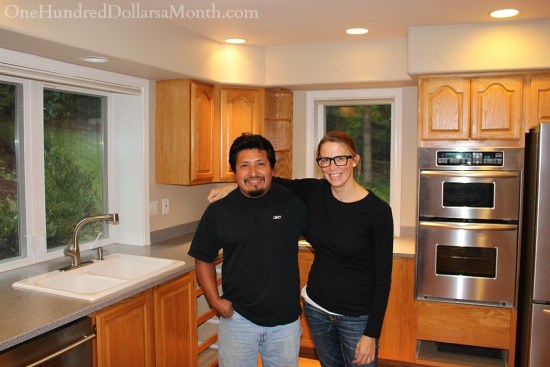 The very next day Chino the Handyman and his crew showed up and the remodel started. Within an hour a retired man walking his dog marched right up in to our driveway and began quizzing the workers. I had to stop him from coming in the house. A few hours later he was back, this time with the dog, his wife and another set of questions. What were we planning on doing with the place, who were these people working on the house, how long was the work truck going to be parked in the driveway, could he come inside and look around? 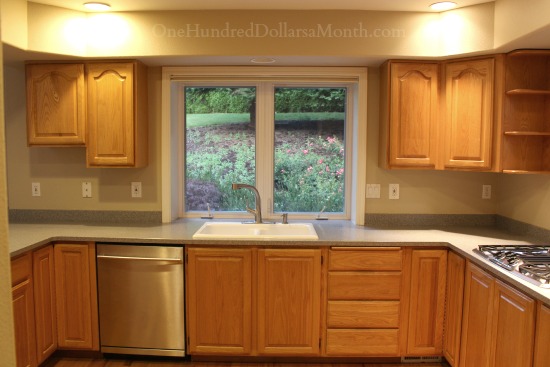 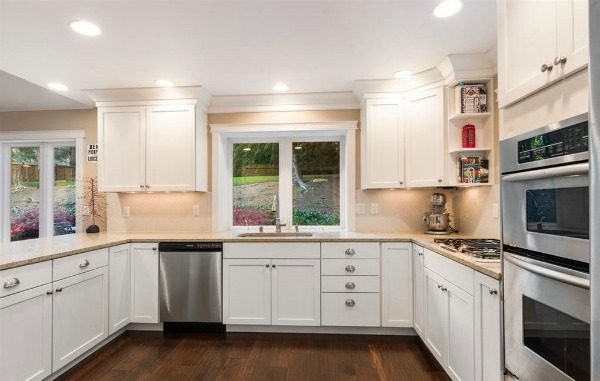 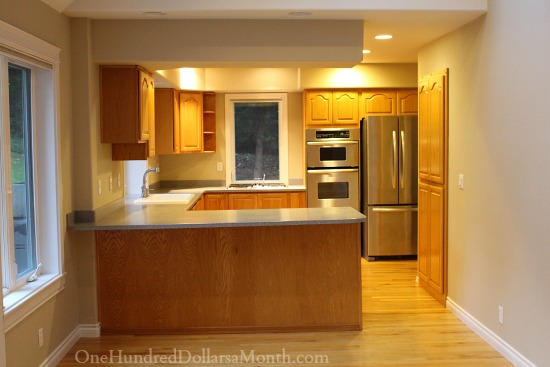 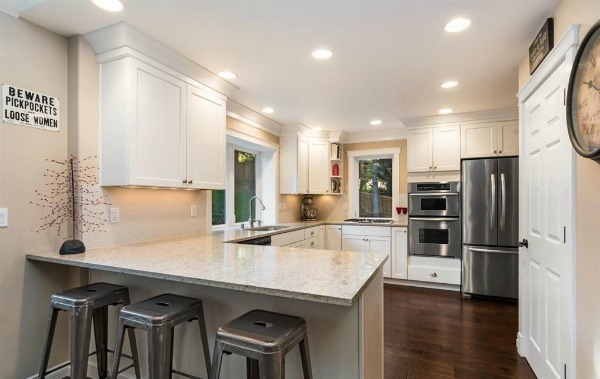 I don’t think he caught on that I was the actual homeowner for a few days because every time he’d come around and ask questions I’d have this quizzical look on my face and really just sort of brush him off by saying I didn’t know, and that I had to get back to work.

There is a HUGE difference between a polite hey, welcome to the neighborhood conversation, and intense interrogations. There is also this really cool thing called reading people’s body language. It’s not a hard skill to learn either. And yet, for some reason, I couldn’t step outside the house without running into this person. And it drove me bonkers. 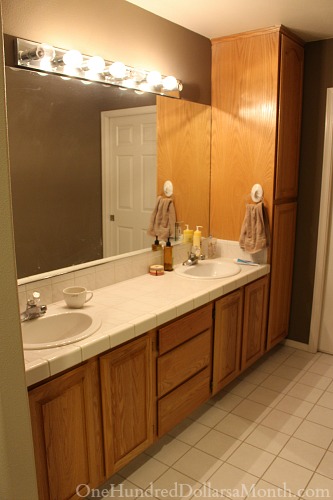 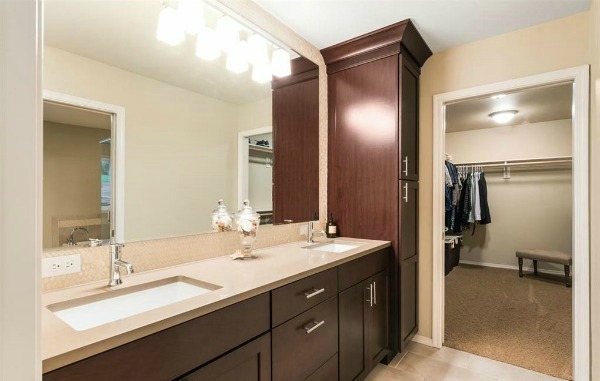 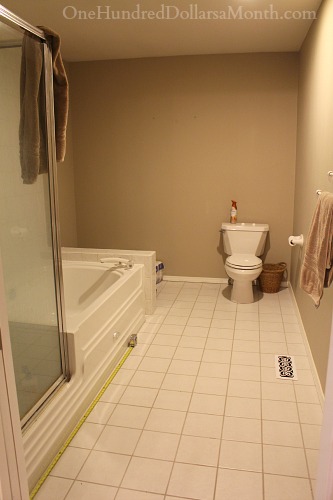 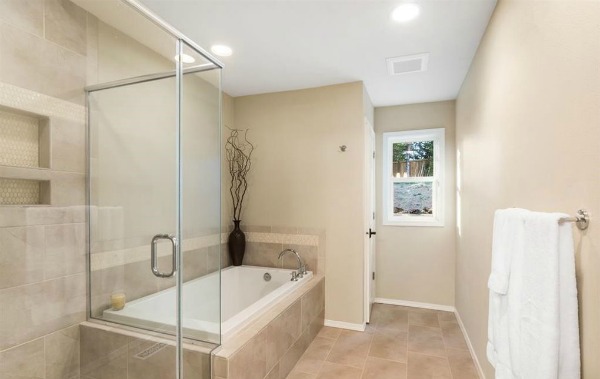 Luckily though, the demolition stage of the remodel was over in just a few days so I could hole up inside. And, because I can be a bit of a stalker myself, I quickly noticed this couple walked their dog in a particular pattern around the neighborhood. So, I just started taking Lucy for walks in the other direction. And that whole game of cat and mouse was soon over with.

Until I started my pruning phase. 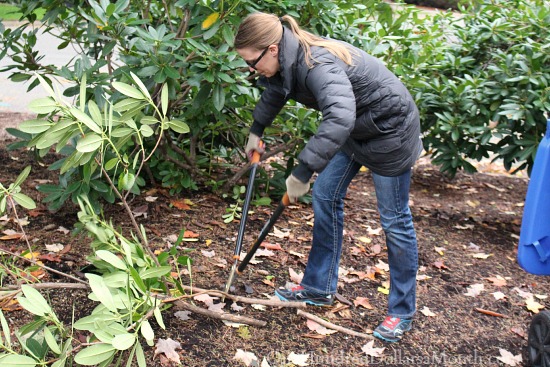 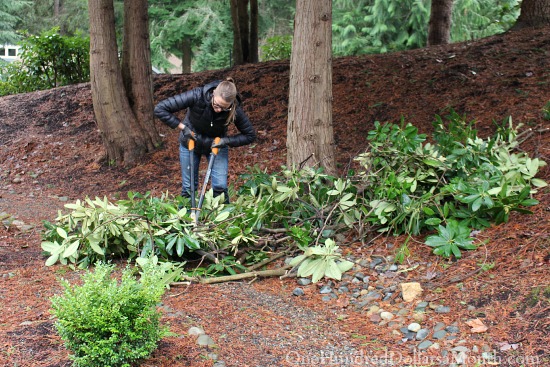 I thought I was being super clever by pruning the 500 million rhododendrons on the property, but I was wrong. Every few days I’d go outside in the late afternoon {because there were less people outside at the time} and trim {to within 1″ of the ground} one of the many rhododendron plants. I’d then haul my least favorite shrub on the planet into the backyard, and cut it up into tiny bits before throwing the leaves in the back of my husband’s truck {below the top of the bed of course} when he got home from work so nobody would notice.

But someone {with nothing better to do, like I don’t know, cure cancer, feed the homeless, read a book to a second grader, clean up their own yard} ratted me out. And thus the letters from the HOA started showing up in my mail box.

In case you forgot, this is a very large neighborhood with hundreds of homes in it. So someone, had some serious time on their hands if they noticed a little yard work being done. Then again, if you are walking the same loop around the neighborhood every single day, I’m sure you’d noticed if something was a little off if you were stalking someones house too {that, and the fact about 90% of the people in the neighborhood PAY someone else to do their yard work for them. So maybe a homeowner working in their own yard was a red flag?}. But noticing something like the removal of some seriously ugly plants is one thing. Reporting it to the snoopervising committee is something completely different. 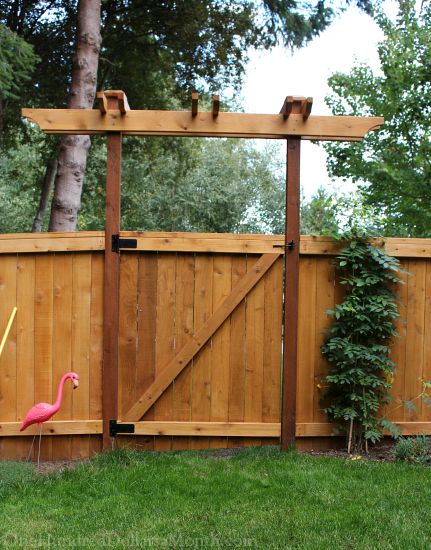 Soon after we put up a {5 foot} fence {because that was the highest we were allowed to build it}, the letters seemed to stop. Sure, I’d get the occasional person {who I didn’t know} walking by who would shout something to me from the road, while I was in the privacy of my fenced backyard but the letters stopped. So that was nice.

Now the only things I had to deal with when I dashed outside was the grandma who didn’t speak English but made it a point to stand directly behind me and shake her head in disappointment, when I pulled weeds. That annoyed the CRACKERS out of me. But stranger than that was a certain landscaper in the neighborhood who wanted to know where and when my husband worked, along with about 20 other million personal questions. Unlike grandma though, I was able to nip any further conversations with that guy in the bud. I simply gave him the evil eye and went inside the house. And then totally ignored him every.single.time. I passed by him again. He got the picture real quick that I wasn’t up for a game of 20 questions {that you shouldn’t be causally asking someone anyway}.

Again, I want to say, in general, I am not a rude person, but there is a HUGE difference between a polite conversation and being all up in someones business. Don’t get me wrong, there are some really nice people who live in this neighborhood {my neighbors with the black dog, The Church Lady, my 90 year old neighbors, the lady up the street with the old German Shepard, the lady who I’ve never talked to once because she is always on her phone but that has worn the same orange track pants and pink jacket every day she has walked by my house for the last three years. She totally gets a round of snaps for not giving a fig what people think of her outfit and not feeling the need to paint her face and put on $500 in workout clothes just to get her walk in by 8 am}.

Are you still here? Are you still reading this nonsense? Do you feel like you are sitting across from your nutty friend and she’s just venting and this really isn’t a blog your reading? You have no idea what this is exactly, but this crazy train, you’re on it. And just like Lauren from The Truman show you keep wondering… 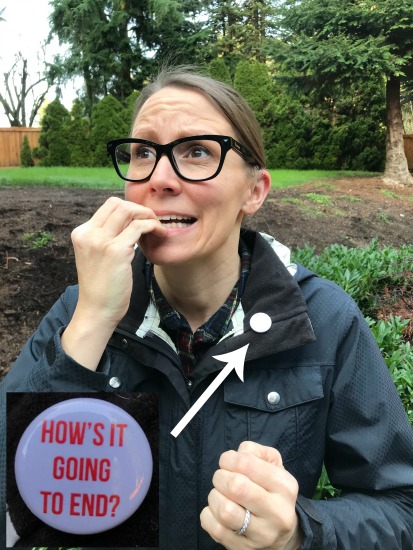 Well you’re not the only one sista. Everyday I wake up and it’s like going to the carnival. I never know what prize I’m going to go home with or what shiny object is going to strike my fancy. Blah blah blah…. 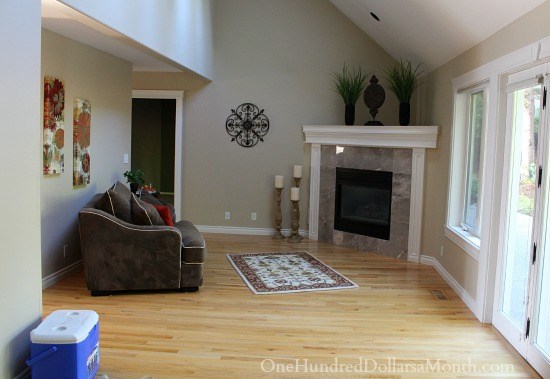 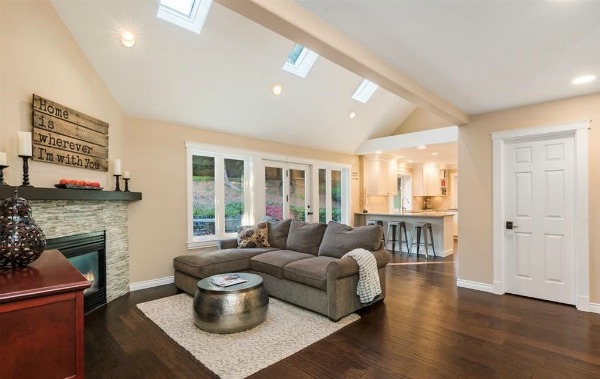 After the remodeling and garden projects were pretty much done, I got bored. Like real fast. Like, what do people do all day in their finished house, with their finished yard, when their kids don’t really need them anymore stage in their life? I’m not a shopper, I don’t hang out at the wine bar, get my hair or nails done, browse… for ANYTHING, lounge around watching soaps or reality tv… Other than walking my dog or the occasional hey, today looks like a great day to walk a marathon, I don’t really have a sport I spend my time doing….

SO WHAT? WHAT DO I DO NOW? I was pretty much walking in circles for a few months there until I started dyeing wool and rug hooking in earnest. 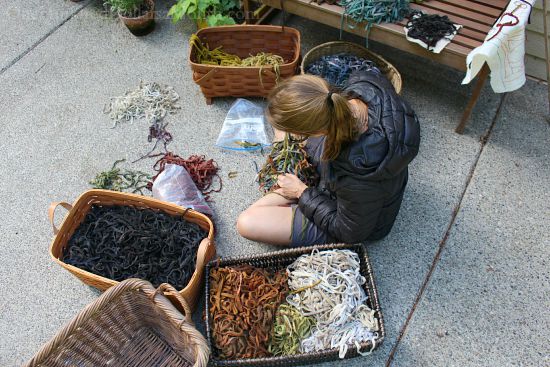 And then that just became a normal thing I did every day. Neeeeeext! 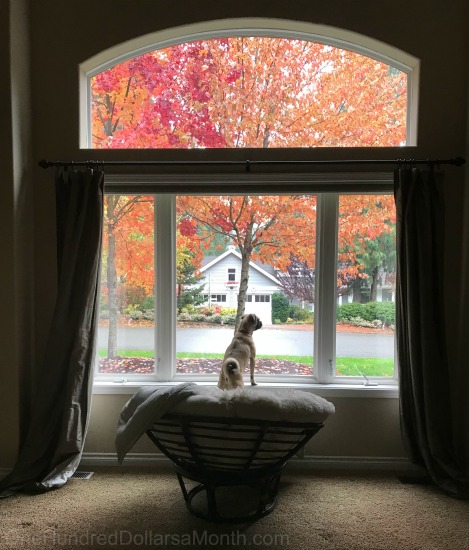 The days in my dull suburban life slowly passed, {actually, they crawled} and I stared at the walls, some days I’d even join Lucy at the big window and watch the people pass by {all ten million of them each hour}. I began to wonder if people living in other HOA’s got emails or messages like this in their neighborhood flyer boxes: 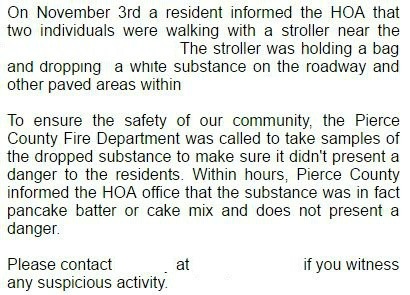 I don’t know what it’s like where you live… but yo, here in Stepford, we have 911 on speed dial. Because 2 people walking back from the store with a bag of pancake mix {with apparently a hole in it} just doesn’t make sense to us. 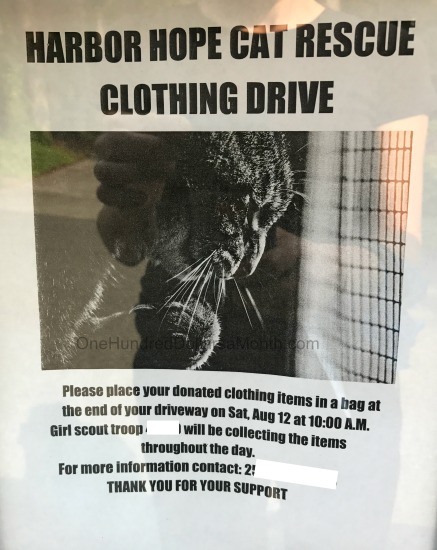 The clothing drive for cats though…. Seriously, I couldn’t make this stuff up, even if I tried. 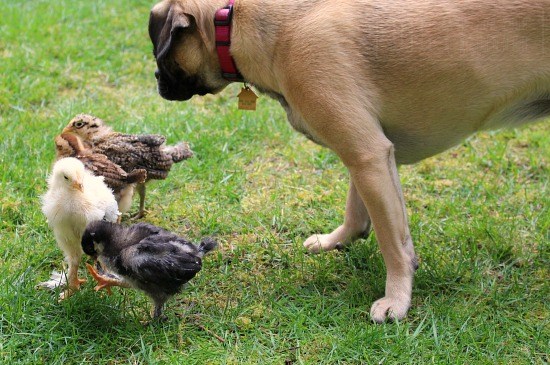 And then, then there was that whole keeping chickens in your back yard thing. Which, I never told you about. I saved that one for when we officially sold the house. 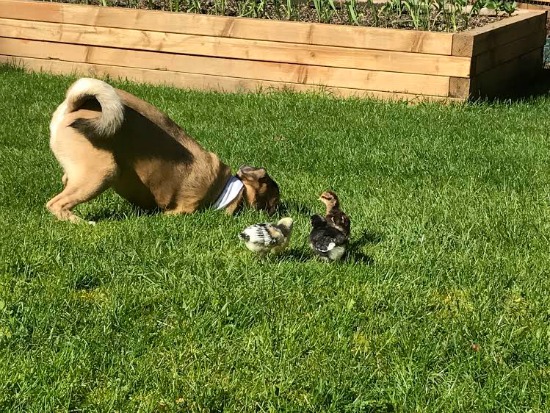 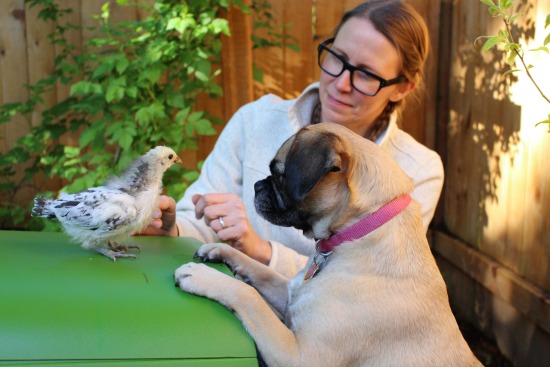 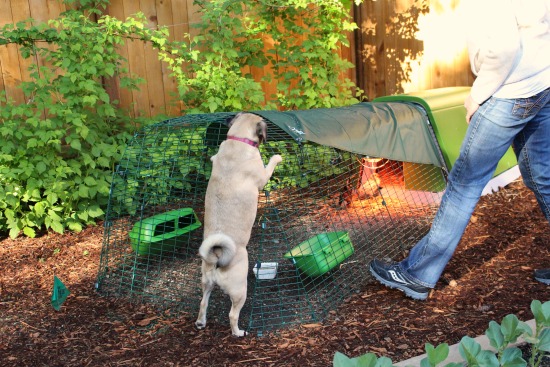 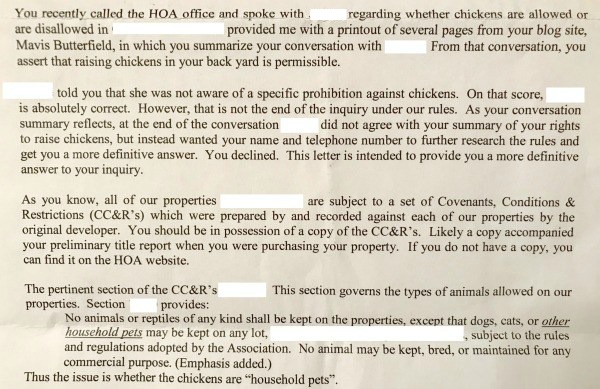 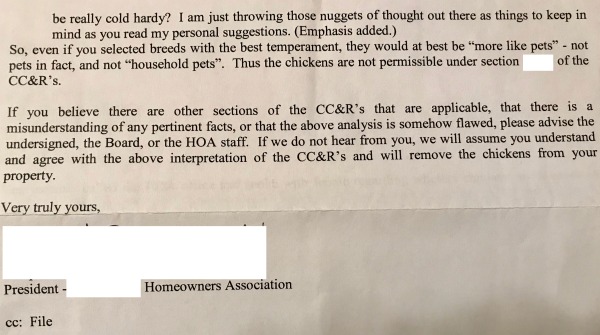 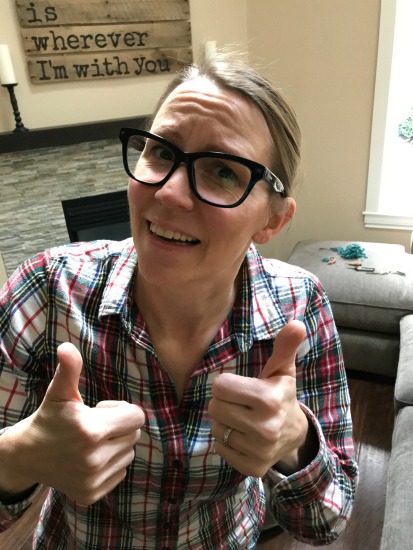 It’s a good thing I like to keep things PG around here…. because otherwise, I wouldn’t be using thumbs to express my feelings about how I felt about that letter.

A few months later, we put the house up for sale, and got a better than full price offer the very next day. It just goes to show you, there’s a house {and neighborhood} out there for everyone.