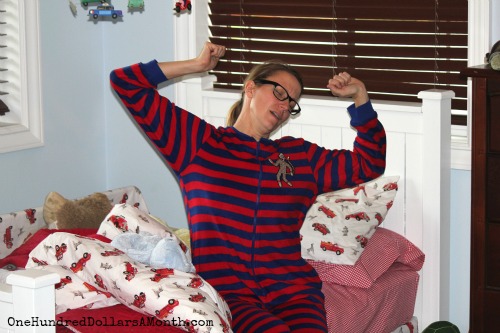 A lot of you {me included} have probably set a whole list of goals for the New Year…and I would guess that “lose weight, eat healthier, exercise more” show up on a lot of those lists?  If you are like me, putting “sleep more” on the list kind of feels like writing “do less,” which is tough.  Even though we all kind of know, intellectually at least, that sleep is SUPER important to accomplishing all of the goals listed above, it is the one area of our overall health and well-being that we have such a hard time giving a priority.

Basically, since a ton of us walk around totally sleep-deprived all day, I thought I would provide an awesome public service by creating a list about the value of sleep.  One, because I love lists.  They are awesome.  And two, to give you some concrete examples of HOW lack of sleep can derail your goals:

If those sweet little nuggets of information weren’t enough, let me entice you with this:  I found an article on The Boston Globe about the President and Editor in Chief of Huffington Post, Arianna Huffington, collapsing from exhaustion.  When she fell, she broke her jaw.  While I am not a math-magician, I think we can reasonably add up the facts and say, lack of sleep can cause broken jaws.  Just saying.  If you don’t want to take it from me, you can always check out the book she wrote as a result, called Thrive:  The Third Metric to Redefining Success and Creating a Life of Well-Being, Wisdom, and Wonder, where she apparently touts the importance of sleep {among other things} in a successful life.

Okay, have I convinced you?  I hope so.  Now all you need to know is HOW to get a good night’s sleep and you’re basically on your way to a healthier, happier you.