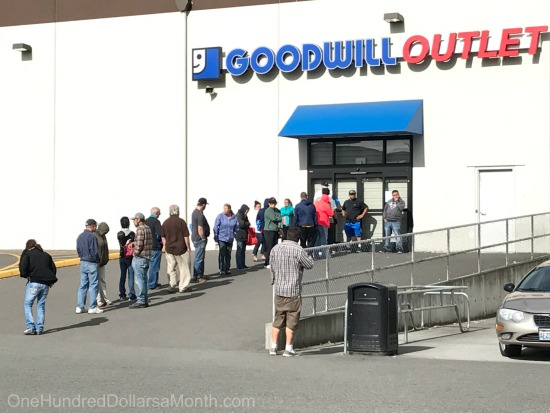 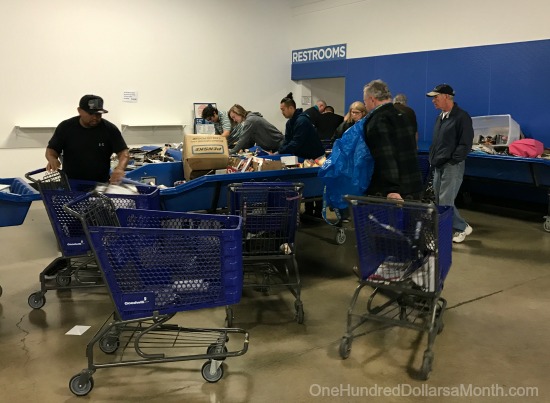 One word comes to mind. AGGRESSIVE. As in a bunch of people grabbing two carts and running to the back of the store with them and THROWING everything they could into their carts as fast as possible. The people we saw didn’t even stop to look at what they were throwing in their carts. The name of the game was just fill the carts and sort through them later. Which is you are an everyday average shopper just there looking for a deal… was kind of lame. 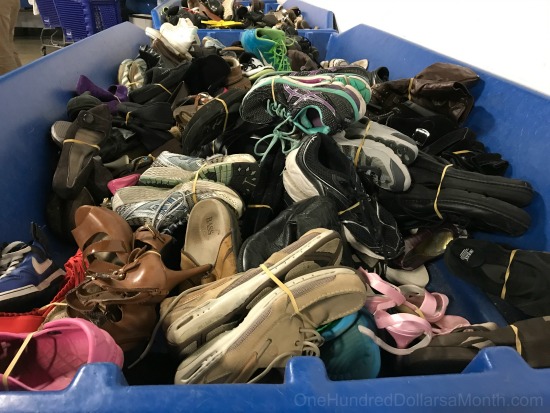 The most popular sections: DVD, Books, Shoes and Handbags. 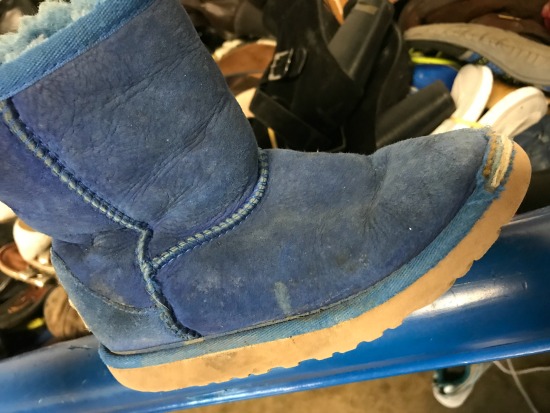 And in each one of those sections there were multiple people with multiple carts, tossing stuff in them as fast as they could. So clearly, these people were there for the re-sale angle. 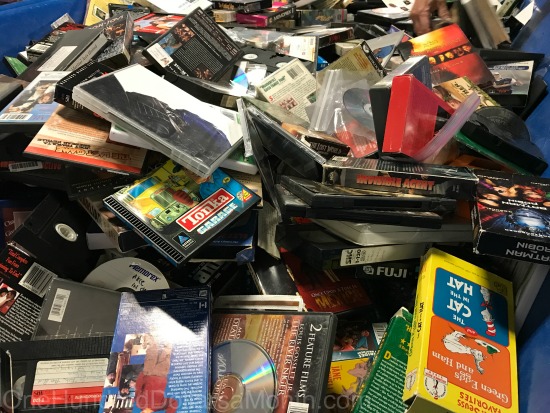 And that’s totally fine, I get it. Buying stuff cheap and turning around and selling it online, there is nothing wrong with that. Used DVD’s sell for $1.99 at the Goodwill Outlet, and so it made me wonder how much of a profit people these people are actually making on re-selling them?  Aren’t most people using Netflix, Hulu or Amazon Instant Video these days?

Now textbooks, are a totally different story. I saw people with carts full of textbooks off to the side scanning barcodes and checking their current selling prices on Amazon. Now that, I could see being a big money maker. If you found the right book. 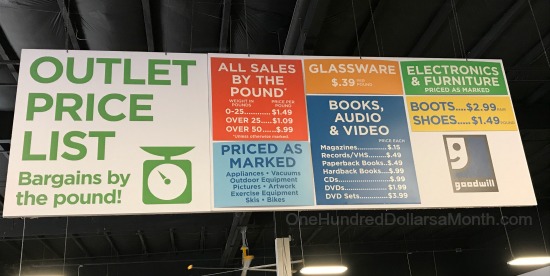 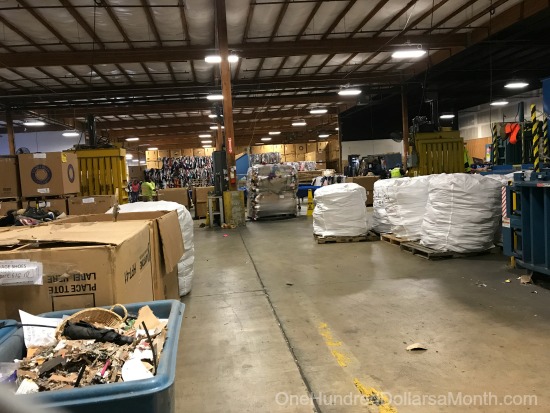 I took a couple of shoots of the back of the store where giant sacks of clothes were getting filled {with presumably unsold outlet items}. 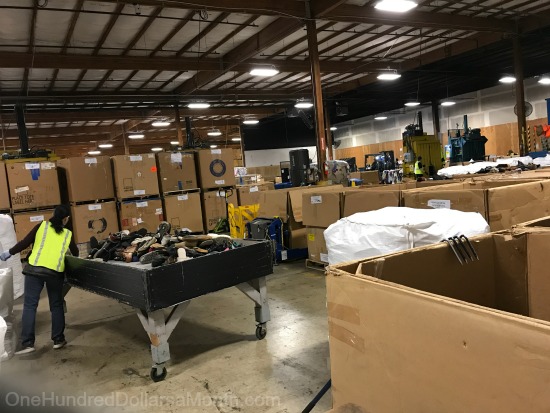 I wonder how many days they let a bin sit out on the floor before they declare the items unsaleable? Anyone know? 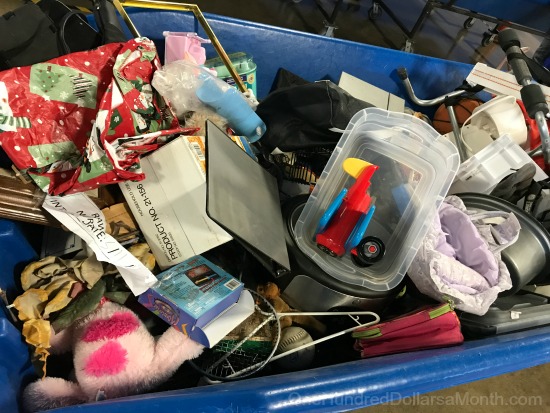 This was a typical “household” type bin. It was filled with everything from stuffed animals to cake pans and hangers to athletic equipment, outdated exercise equipment and knickknacks. 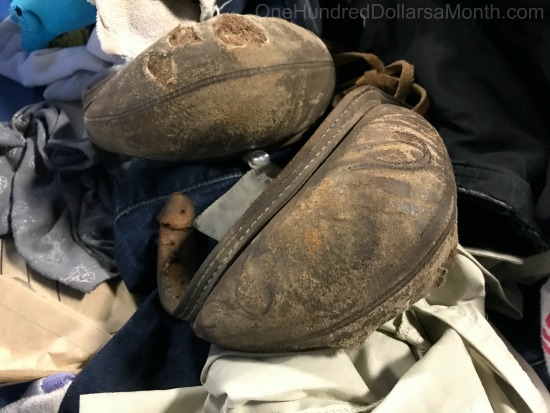 Now what the heck is this? The only thing we could come up with was that maybe it was some sort of leather shoulder football pads {obviously vintage}? Whatever they were, the relic was stuffed with HAIR. 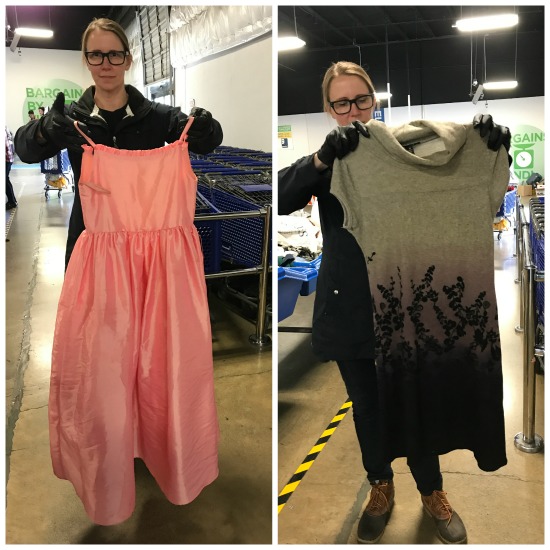 If you had time to dig through troughs of clothes, there were some nice things to be found. But again, you REALLY had to know your brands and inspect each item for stains and holes. 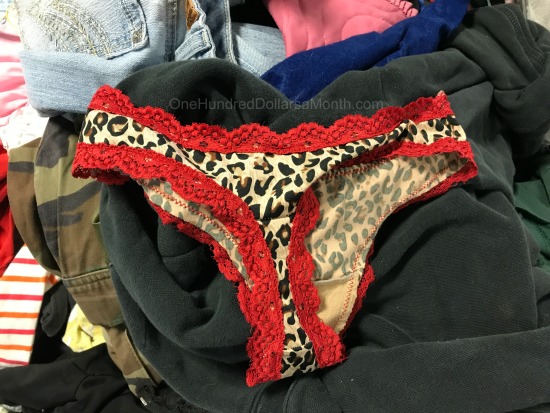 Awesome. A used leopard print thong with red lace trim, just what I was hoping to find. BRING GLOVES people, bring gloves if you go. 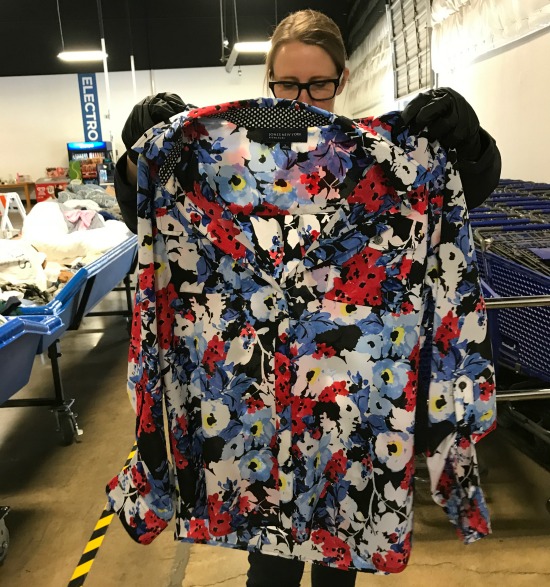 Now I wouldn’t wear this, but for less than $0.50 I’m sure someone would love to have an almost new Jones New York top. I bet someone could sell this on eBay and make some money, don’t you think? 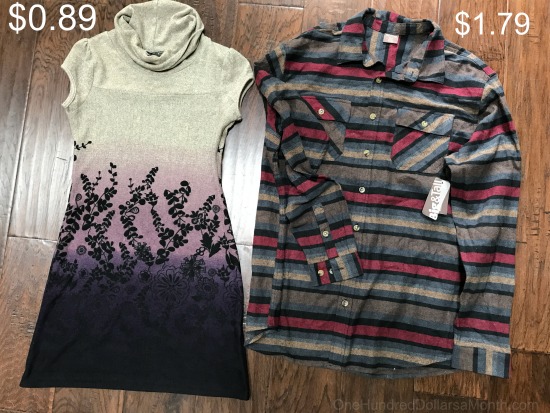 Anyway, here’s what I came home with. A like new warm dress for winter {which I will pair with wool tights} and a new with tags shirt for the men’s shelter.

Would I make this particular Goodwill Outlet a regular stop? Probably not. The aggressive behavior of some of the shoppers was a total turn off. Do I think there are deals to be had there? Yes. If you don’t mind scouring through bins of used items that could probably all be found at a garage sale.

Have you ever been to a Goodwill Outlet store? If so, were you there for yourself, or for re-sell reasons?