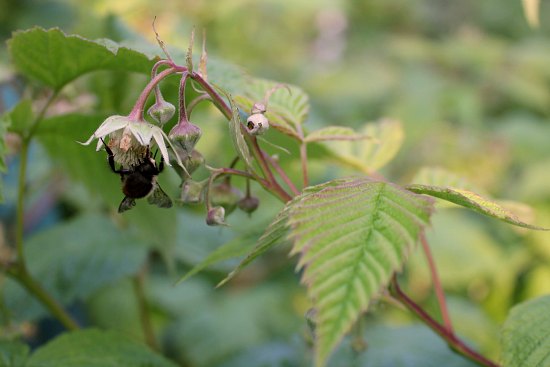 Most gardeners go out of their way to invite bees into their gardens.  We know that they mean more veggies, more flowers, etc.  I guess what I mean is that we know that they are pretty dang essential to our food supply.  Over the last few years, the bee population has been on the decline–pesticides have been largely to blame {another reason growing my garden as organically as possible appeals to me}.

Still, I don’t really have any control over massive single crop growers, and according to an NPR article I read, the type of seeds are sometimes to blame.  Seeds treated with neonicotinoids {say that ten times fast} for crops like corn, soy and canola expose bees to pesticides as they feed from the resulting plants.  Neonicotinoids are derived from nicotine and while they do protect the plant {the plant absorbs the pesticide as it grows and it helps to ‘protect the tissues’ of the plant for the duration of its lifecycle.  The only problem is that the bees also take in the nicotine derivative and literally get buzzed {pun intended!}.  The result is that it basically poisons their nervous system.

In Europe, some of the neonicotinoids have been banned temporarily, until they can sort out the full extent to which they affect the bees {of course, wouldn’t you know that if it isn’t a good idea, Europe would be on board with banning in looooong before we even get around to consider it}.  Canada is also working on regulating it more carefully.  The EPA has announced that they would probably not allow any NEW neonicotinoid pesticides, but no word on regulating the ones that already exist.

I thought the whole article was pretty interesting, just because you know that the pesticides you use on your food affects bees, but I have never really stopped to consider that treated seeds would have longterm effects on the health of the bee population.  Guess it is a good thing I use untreated seeds.

What are your thoughts on the issue?