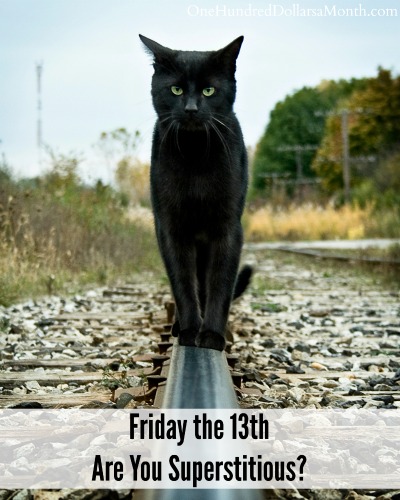 Okay, I am going to admit, I am not a superstitious person.  I’ll walk under ladders, while carrying a black cat.  I’ll board a plane on the 13th…especially if it’s a good deal.  I throw caution to the wind–I’m a wild woman.  Still, I thought it would be crazy not to at least mention that it’s Friday the 13th…and of course, provide you with a few facts to stir up some conversation at the dinner table tonight.  What can I say?  I am a sucker for LKFLKU {little known facts, little known use}.

History of Friday the 13th

The exact history of the lore around unlucky number 13 is unknown, but some historians have suggested it may have religious undertones.  There were 13 people at the last supper, and Jesus was crucified on Good Friday–at some point, Friday and 13 became synonymous with disaster.

Wow, that is random…

There is actually a phobia named after the fear of the number 13.  That also means, there are actually people who are so scared of 13, that is was given a name.  For the record, the fear is called triskaidekaphobia.  Guess what?  There is also a name for the fear of Friday.  It’s paraskevidekatriaphobia–which I am pretty sure is completely unpronounceable gibberish.

Weddings in the Middle Ages were never held on Friday–it was considered bad luck.

Taylor Swift was born on the 13th, turned 13 on Friday the 13th.  Her first album went gold in 13 weeks and her first number one song had a 13 second intro {according to USA Today}, so I am pretty sure that pretty much negates any bad juju the number 13 might have ever held, for her, at least.

So, there you go.  Little tidbits that you can offer passer-byers today.  You’re welcome.