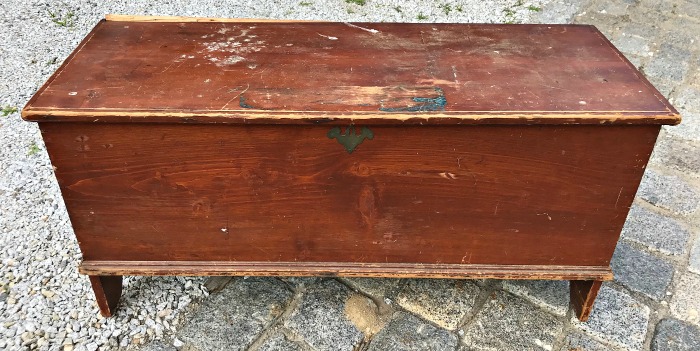 The HH and I went to the recycle center the other day to drop off cardboard, old oil from the car and our household trash. And like always, I made him drop me off in front of little sheds {our town has one for books and one for household items} while he did the recycling. 😉

Every other week or so it’s the same routine… Me telling him we need to do the recycling, then helping him load everything up in the car and then ditching him at the last minute so I can have a little look around.

I always tell him he can just wait in the car, that I’ll just be a second or two… but he can’t stand waiting in the car while I hunt for freebies. I think it makes him feel like we’re a bunch of beggars or something.

I don’t think he’ll ever understand the concept of the place.

We pull up to the little freebie sheds.

I nearly JUMP out of the car before it has stopped and and shout… THERE’S MY NEW COFFEE TABLE!

I get out of the car.

I inspect the new {to me} pine {just what I was looking for} 6 board chest and deem it is in fact the perfect winter project and just the right size thank you very much to use as a coffee table. 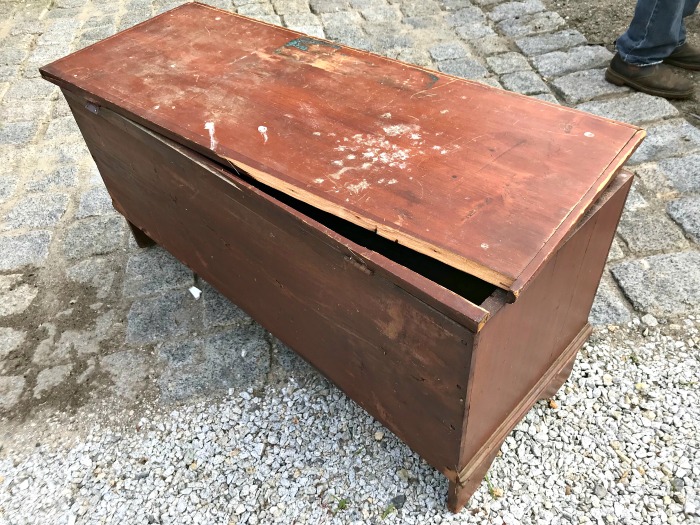 Then as I have my hand on the fine piece of craftsmanship, some yahoo comes along and opens the top of the chest a little to fast and before I can react, the top of the chest slams against the back and now I’m standing in front of a busted not so perfect coffee table and my heart sinks a little. 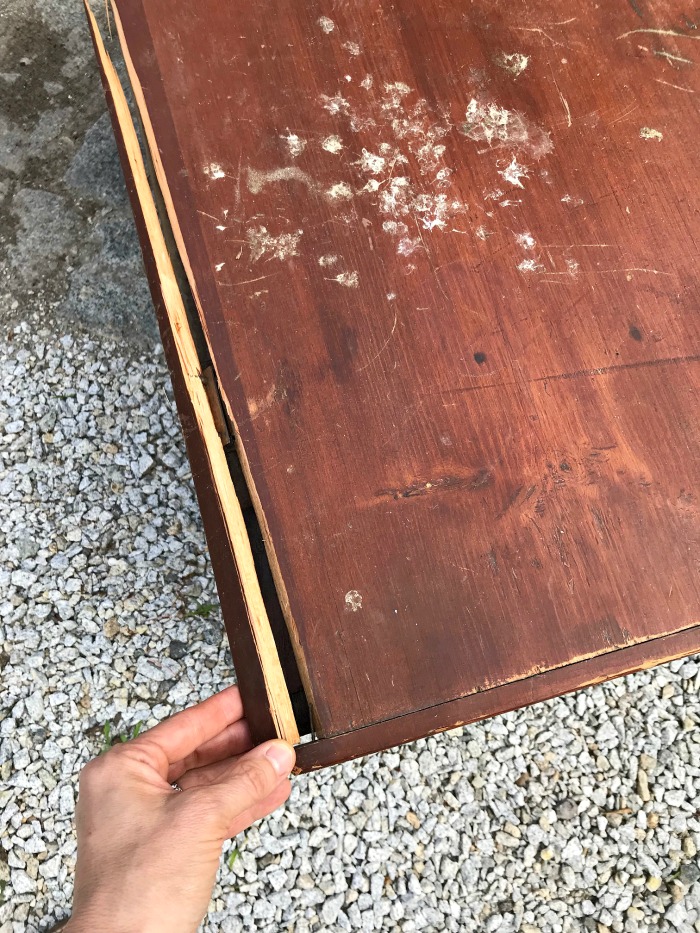 I was like, oh hey, don’t worry about it. {Because what else was I going to say?}

And my husband ACTUALLY SAID… Hey thanks, you just did me a favor to the guy.

Can you believe that? YOU JUST DID ME A FAVOR. As in, now I don’t have to take this piece of junk home. 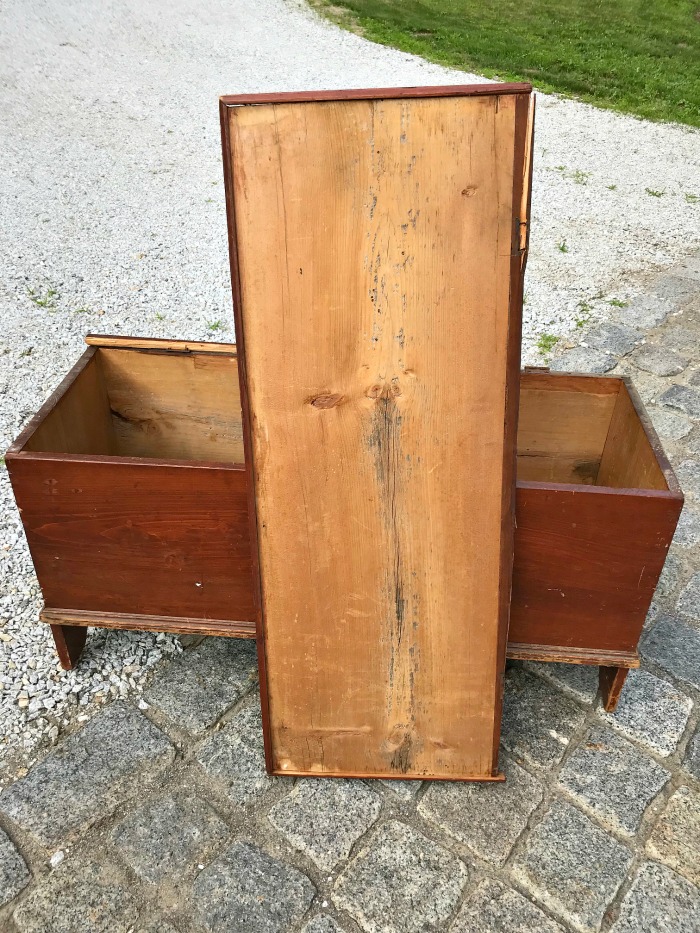 I made him take it home anyway. 🙂 Maybe I can fix it. I think all I need is a small strip of wood to replace the broken bit. I was planning on painting it anyway, and even if I can’t, I can still use the chest portion to store my craft supplies in.

So there! Take that Mr. Cranky Pants!

Mr. We Don’t Need Other Peoples Used Furniture. Because somebody probably DIED on it. 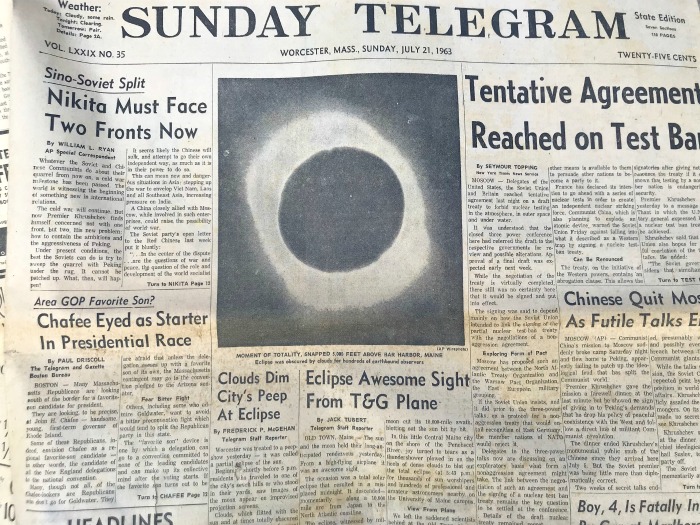 While the guy who ripped off the top of the chest and I were standing there in awkward silence after he had just ruined my coffee table, we noticed the old sheets of newspaper inside the chest.

The Guy Who Ruins Other People’s Coffee Tables got a big smile on his face and told me how he was 8 years old during the eclipse in 1963 and how his family had just bought a new refrigerator and he had saved the box to make an eclipse viewing thingamabob blah blah blah… and all I could think about was the broken lid. 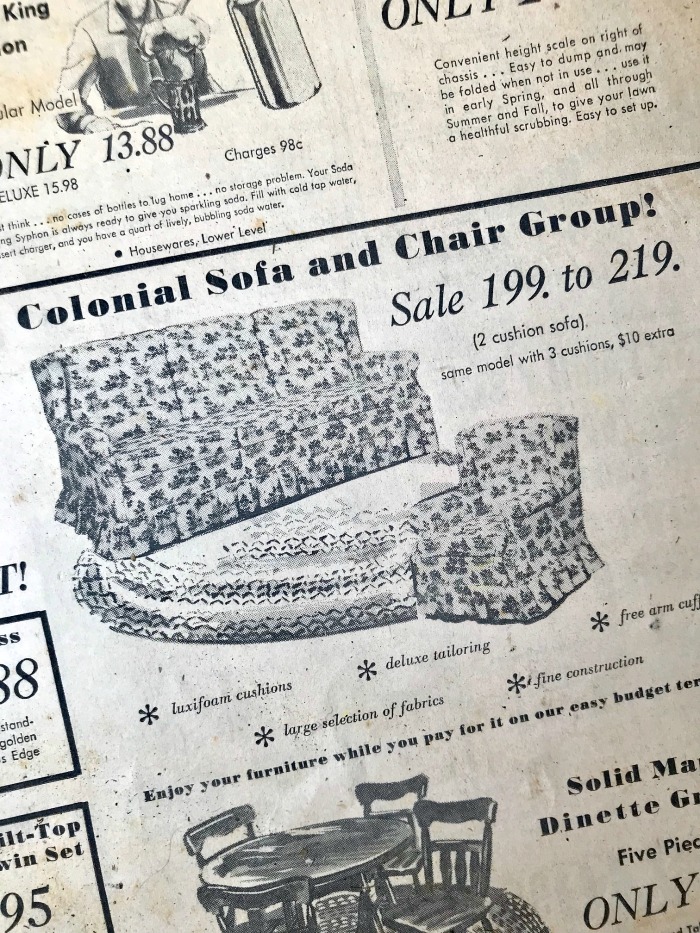 And then I started looking at the other pieces of newspaper and found out that in 1963, you could buy a new couch and matching chair for $199. What a deal! 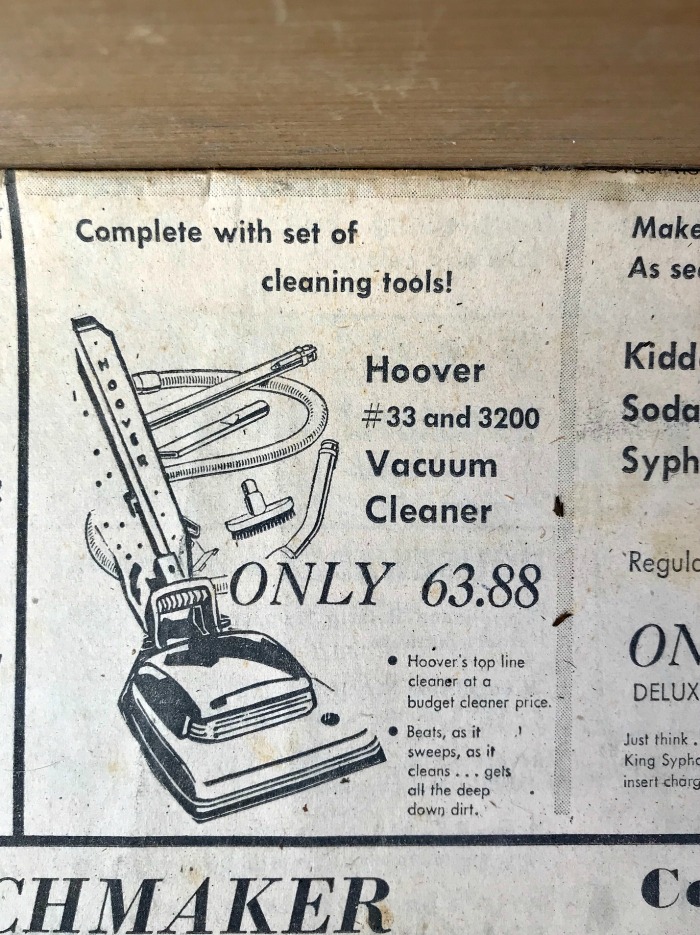 And a new Hoover vacuum for only $63.88. {Which is pretty much what you can get an el cheapo version of a new one today for.} 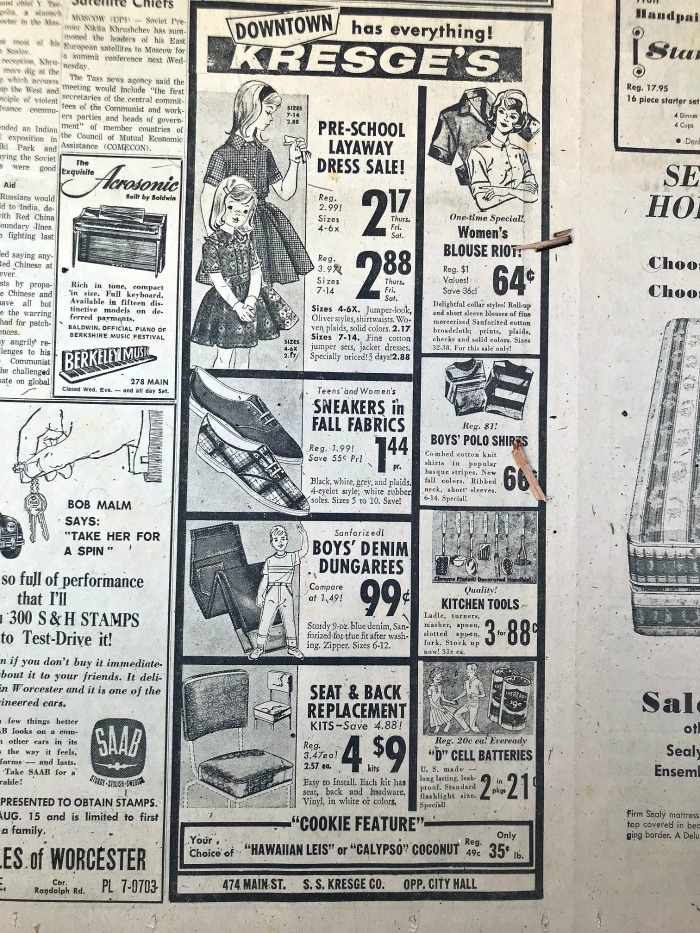 Why don’t we call jeans “dungarees” anymore? Dungarees sound so much better, don’t they? 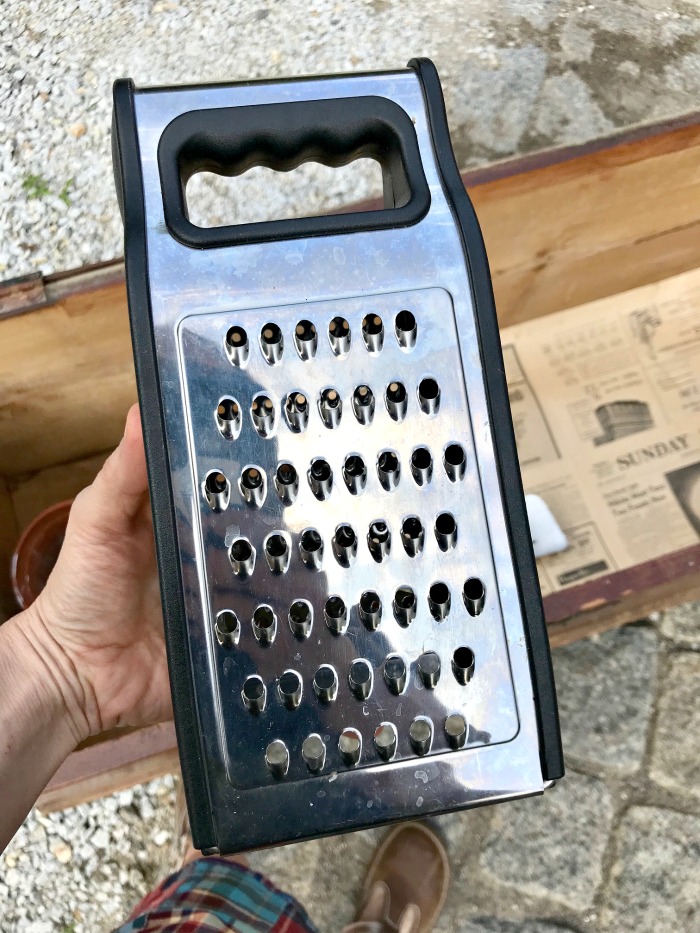 Also found at the recycle center the other day… A new {to me} cheese grater. 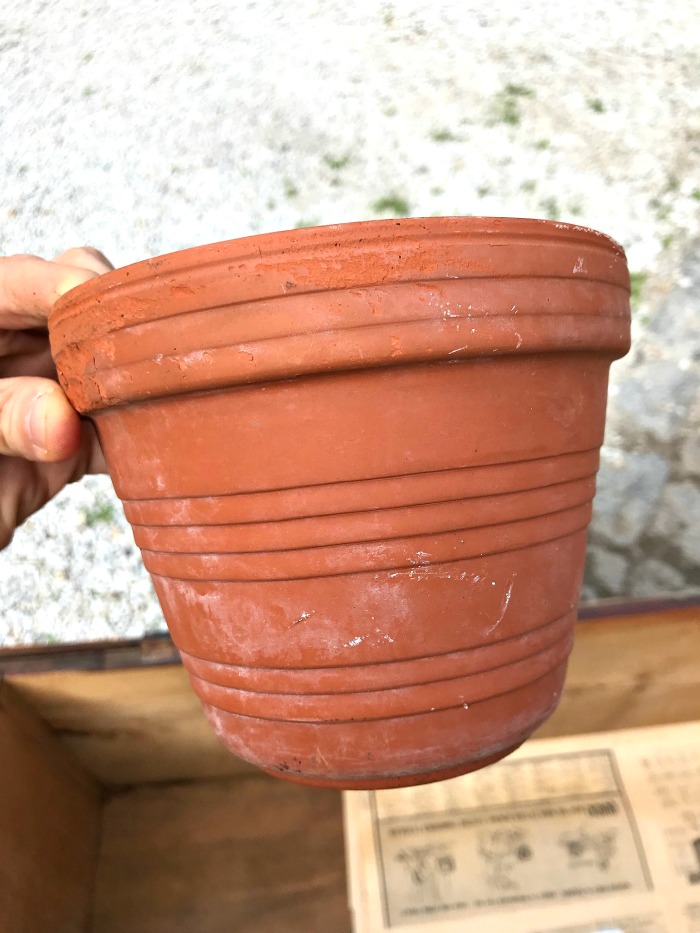 And another terracotta pot for the back patio. 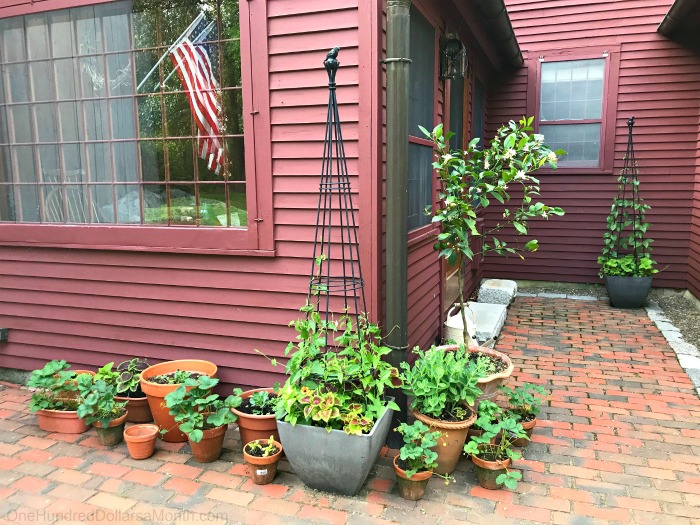 At this rate, I should be able to fill up the entire back patio with freebie terracotta pots by the end of the summer.

Freebies. You just never know. Sometimes you hit the jackpot, and sometimes you don’t. And sometimes, someone comes along and reminds you that stuff is just stuff and people come first. Attitude is everything. 🙂

Have an AWESOME 4th of July everyone, stay safe.